Topics like this didn’t used to be political in nature. But through no fault of lawful gun owners everywhere, anything to do with a gun has become a political issue.

In the interest of gun safety, on February 9, 2013, there is an event at the Escambia River Gun Club for women only that you should know about. Looks like a good chance for ladies to get some expert experience and advice from NRA Certified Pistol Instructors. 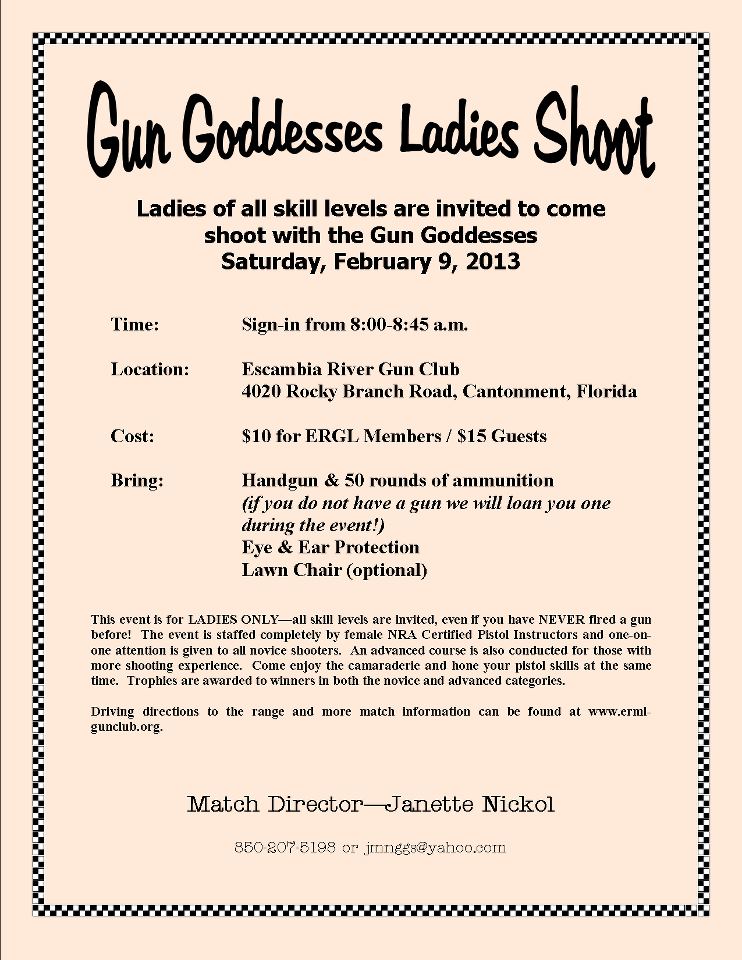 Here we go again. Pick out the enemy, isolate it, demagogue it if that’s what it takes to win your point. It works whether it’s nationalizing health care or winning elections. It’s a tactic outlined in Saul Alinsky’s Rules for Radicals and explains to a ‘T’ why this administration does what it does. This time the subject is controlling guns and everything associated with it. If you’re not for gun control, then you must want school children to die. The low-information crowd eat that up and, with this administration, there’s an unlimited amount of ‘feed’ to be had.

Sen. Dianne Feinstein, who’s leading the push to restore an assault weapon ban, acknowledged on Sunday that the effort faces tough odds to pass Congress and she blamed the nation’s largest gun-rights group.

This time the perceived enemy is the NRA. That’s only because they can’t run against the founding fathers for writing the second amendment. They can’t openly run against the Constitution. Just like they couldn’t openly run against ‘health care.’ So they made health insurance companies the bad guy and campaigned against them. The result of the current gun control push, if successful, is likely to end up with the same disastrous results as the Affordable Care Act. Where everything it was promised to do failed.

Through my unscientific poll of Facebook posts, people are saying that the lines to get into the gun shows in Pensacola, Jacksonville, Orlando, and Miami are the longest ever. Since the gun store shelves are almost empty and out of ammo, I have to believe that President Obama wins the ‘Top Gun’ Salesman of the Year award.

It was heartening to see so many people getting CWP (Concealed Weapons Permit) training. Young, old, Black, White, and everywhere in between. And they weren’t all republicans either. Believe it or not, democrats believe in personal protection too. Contrary to Sen. Dianne Feinstein and Barack Obama’s argument, I didn’t see any gang members or gang bangers there buying guns. I saw everyone there that was buying, filling out the required paperwork and going through the background check procedure.

The laws of supply and demand have affected the firearms industry, at least at the retail level. Weapons like the AR15 that was $600-700 three months ago, are now between $2000 -3000. Ammo? You’re lucky if you find what you’re looking for. There was no 40 caliber range ammo, which was what I was looking for. I later found some, at before hysterical (over $1.00/round) prices  too, at a local shop off the beaten path. Not at the gun show. The name of which shall stay my secret. You’ll have to email me to get it.