And by ‘Lobby’ I mean most of the media and lefty talk-radio. It’s about calling names and using hyperbole for measures that no one is advocating. It’s what the Left does. Not necessarily democrats. Just those that hold this ‘ban all guns’ and ‘ban assault weapons’ agenda.

It’s not just the ranters on the left, like MSNBC’s Lawrence O’Donnell, who recently called National Rifle Association chief Wayne LaPierre “the lobbyist for mass murderers.” O’Donnell is a controversialist who says things like that all the time. So is CNN’s Piers Morgan, who told the Gun Owners of America chief Larry Pratt, “You are an unbelievably stupid man” and “You shame your country.”

when a Republican congressman, Georgia’s Jack Kingston, argued on MSNBC recently that tough gun control laws haven’t prevented mass shootings in some European countries, the network’s anchor, Thomas Roberts, responded, “So, we need to just be complacent in the fact that we can send our children to school to be assassinated?”

Then there’s Lefty talker Stephanie Miller and the Media Matters crowd that say, in response to NRA President Wayne LaPierre’s suggestion that there be a police presence in schools, (like we have here in Pensacola, FL, they are called ‘resource officers’),  “oh sure, like we can afford to have a cop in every classroom.” Nobody suggested a cop for every classroom. Proving that the Left will say whatever they need to say if it will advance their agenda. The facts don’t matter.

There are ways to save lives without banning guns. Do away with so-called ‘gun-free’ zones and get real with lawful ‘concealed carry.’ It’s already against the law for a mentally unstable person to buy a gun. But clearly, improvements can be made in the mental health field if it weren’t for the ACLU. Groups like them advocate for part of the Constitution. Not all of it. Make punishment meaningful for crimes committed with guns. A bad person with a gun can be stopped by a good person with a gun. Whether the good person wears a badge or a pocket protector, lives of fellow citizens can be protected.

As an update to this post, Where Rules Of The Road Are Not, there is an exception, a ‘seasonal’ exception to who can drive unregistered motor vehicles and trailers on Florida’s public highways. Call it a carve-out for BIG DELIVERY if you wish, because it only applies to delivery services that employ 10,000 employees or more in the State of Florida.

As far as I can tell, there is no exception for landscapers during the peak growing season.

That such a statute exists came as a surprise to me, as I’m sure it is to you. A surprise to me because it contradicts what both the Pensacola Police dispatcher and Traffic department had said weeks earlier.

A special ‘thank you’ to Pensacola Police Officer M. Dupois. She took the time to reference the above statue. The vehicle pictured in the above referenced post does show a discrepancy with the statue however:

Seasonal delivery personnel may pull a trailer from any of these vehicles.

(c)All vehicles specified in this subsection must be:

1.Marked in a conspicuous manner with the name of the delivery service.

But why be picky with “Santa” on a 4-wheeler?

An article in today’s Pensacola News Journal piqued my interest because of a matter that was brought to the attention of the Pensacola City Police, three times.

The article is about a growing trend started by a local entrepreneur that builds and sells battery-powered golf cards that are legal to drive on public roadways and are subject to the same traffic and motor vehicle laws that apply to cars.

A commenter there, Paul Utter said “if they are on the street, they need a tag and insurance..if not get off the road.”

There’s one caveat to that Paul. The Pensacola City Police apparently have one exception to the law. You see, if you’re a hard working guy, or gal, in the landscaping business, of course your vehicle and the trailer you tow both have to be registered and street-legal. But if you work for a big company like, or say, UPS, you’re allowed to drive on the roadways in your unregistered vehicle AND unregistered trailer. No problem.

Of course, Paul is correct. All vehicles driven on the public roadways must be legally registered and tagged, including any trailers being towed.

But there seems to be a double-standard within the Pensacola City limits. I’ve personally never seen landscapers driving around in an unregistered vehicle towing an unregistered trailer. Or any other occupation for that matter. Only reason I use landscapers as an example is because there are so many of them around. (A testament, perhaps, to the need to make a living in a lousy economy. But that’s another subject.)

Maybe you have seen a UPS driver delivering packages in your neighborhood? Maybe he was doing it legally? Clearly, this one was not. 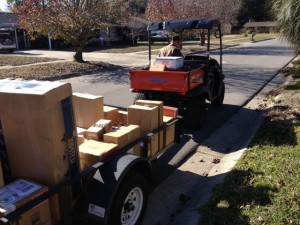 And clearly, the city police were ineffective in enforcing the law. Because repeated calls about the same offense on different days resulted in no effective action. And calls to Police Chief Chip Simmons went unanswered and unreturned.

This writer has no problem in UPS finding more economical ways to conduct their business. But I want to believe that the City Police would agree that the rules of the road actually do apply to everyone on the road.

What? And in the ‘you’ve got to be kidding’ category, there’s this video game. I’m with Bob Parks on this. Where’s the outrage?

This is good news. A small step forward. But it is a step forward. It brings the FairTax to a place in the legislative process that it has never been before. Many thanks sponsors Chambliss and Woodall and to the thousands of FairTax advocates throughout the country. Our work is finally beginning to pay off. Emphasis on beginning.

WASHINGTON- Today, U.S. Sen. Saxby Chambliss, R-Ga., and U.S. Rep. Rob Woodall, R-Ga-7, asked the Joint Committee on Taxation to produce a revenue estimate of H.R. 25 and S. 13, the FairTax bill. This estimate will allow the FairTax to be considered during congressional negotiations for tax reform.

“The current tax code has become too burdensome and complex, and is filled with provisions that benefit only a few Americans at the expense of everyone else. That’s simply not right,” said Chambliss. “Now is the time to enact the FairTax, which would create a fairer, simpler tax code that allows every American the freedom to determine his or her own priorities and opportunities.”

“No matter what they do, honest, hardworking Americans are punished under our current tax code. Pass the FairTax, and we can unshackle America’s job creators and jump start this economy. Pass the FairTax, and we can reward all Americans who contribute to our economy—not just those who can afford the best tax lawyers and accountants,” Woodall said. “We, as a nation, can do better than relying on a tax code that picks winners and losers. Let’s level the playing field with the FairTax and restore more freedom to our economy, not more government.”

Text of the letter is below: END_OF_DOCUMENT_TOKEN_TO_BE_REPLACED

Just heard from the good folks at PHL17 in Philly. According to Travis Brower, Manager of Production and Promotion . . .

We will be broadcasting the Parade on New Year’s Day on PHL17. We will also stream the event live on PHL17.com beginning at 10am.

Kudos to PHL17 for being faithful broadcasters of the Mummers Parade.

The Cleveland, Ohio PD needs to check itself and its ranks for yahoos with guns. Ignoring rules about ‘high-speed’ chases, this chase ends up with two dead unarmed people and no evidence that either of them fired a gun, and no evidence that they had a gun. So if you’re in Cleveland, and your clunker of a car occasionally backfires, you better watch out.

There are plenty of reasons why people would run from police. Why this couple did will never be known. They’re dead. It took 25 minutes for police to put themselves in a position to use lethal force. This is not a case of standing your ground. That 90 out of 137 rounds missed the target is another issue altogether. But I don’t believe running from police in this country requires an immediate death sentence.

So why do you think the mainstream media is mute on this story? And where are the Rhyming Reverends?

Here’s some stats that will blow your mind. It should answer the question to whether the ‘war on poverty’ is lost. Or, raise the question whether it was ever intended to be ‘won’ in the first place. 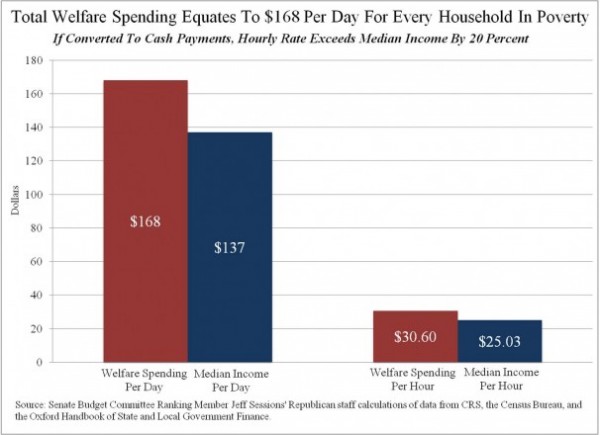 The universe of means-tested welfare spending refers to programs that provide low-income assistance in the form of direct or indirect financial support—such as food stamps, free housing, child care, etc.—and which the recipient does not pay into (in contrast to Medicare or Social Security). For fiscal year 2011, CRS identified roughly 80 overlapping federal means-tested welfare programs that together represented the single largest budget item in 2011—more than the nation spends on Social Security, Medicare, or national defense. The total amount spent on these federal programs, when taken together with approximately $280 billion in state contributions, amounted to roughly $1 trillion. Nearly 95 percent of these costs come from four categories of spending: medical assistance, cash assistance, food assistance, and social / housing assistance. Under the President’s FY13 budget proposal, means-tested spending would increase an additional 30 percent over the next four years.

This so-called war is never-ending, with the purpose of creating as many voters dependent on government as possible. And look how successful it has become under the current Commander-in-Chief. Will Americans vote themselves a decrease in benefits after they’ve already voted for keeping them, and soaking the rich to ostensibly sustain them?

Link:‘Welfare Spending Equates to $168 Per Day for Every Household in Poverty’

The administration is having great success in their ad campaign to spread the wealth around.

The U.S. Department of Agriculture has been running radio ads for the past four months encouraging those eligible to enroll. The campaign is targeted at the elderly, working poor, the unemployed and Hispanics.

Hispanics here and in Mexico.

The most recent data on SNAP (Supplemental Nutrition Assistance Program) participation were released Friday, and showed that 47,710,324 people were enrolled in the program in September, an increase of 607,559 from the 47,102,765 enrolled in August.

The increase is just as much a matter of policy as it is the poor economy. Obama’s poor economy. In The White House, they call it ‘street money.’ Well, they won’t really say that. But that’s what it is. Creating a dependent society, fundamental change in America, is moving right along.

Tax reform is, like it was last election season, and the one before that etc., once again on the minds of politicians in Washington. But for very different reasons than why it is on our mind.

We see the current IRS code as an impediment to starting or building a business and/or providing for our family. They see it as a means to get re-elected.  I’m on the side of the people, not the government.

There is a way to fund the government that simultaneously promotes our personal and national economy. And not just for one class, but for every class. It’s called the FairTax as represented in legislation H.R. 25 in the House and S.13 in the Senate.

There are 80 Representatives and Senators that are on the side of the people. But that’s not near enough to bring the FairTax to fruition. The time is now, more than ever, to speak up. Let your Senators and Representative know that you want bold tax reform. Not more tax deform. You want the FairTax.