Women are losing the war against barbarism right here in the United States. 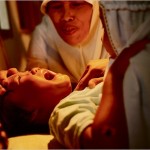 Who knew that the American Academy of Pediatrics, ‘dedicated to the health of all children,’ would be a proponent of this?

You probably didn’t notice because we don’t have the streets filled with “Chop-Chop Squares” a la Saudi Arabia.

But don’t let your general vision crowd out the sub rosa nod and wink toward the disgusting disfigurement officially sanctioned by Muslims around the world . . . and now by the official association of America’s pediatricians, which has now given its own nod and wink toward  a “lesser” version of female genital mutilation.

Oh, and note the use of the words “Asian” and “African” as euphemisms for what it really means: Muslim