A Mexican government agency is to issue some 70,000 maps marking main roads and water tanks for people wanting to cross illegally into the US. Previously, the Mexican government issued comic-book style pamphlets warning of the dangers of illegal migration, while also giving advice on how to stay safe. Launching the project in Mexico City, officials from Mexico’s Human Rights Commission (HRC) flatly denied they were trying to encourage greater migration.

There’s that word ‘migration’ again. Don’t be conditioned into the notion that there is no way to stop it, like that word and the Mexican government would suggest. People immigrate, animals migrate.

“The only thing we are trying to do is warn them of the risks they face and where to get water, so they don’t die,” said Mauricio Farah of the HRC.

What advice does Mexico have for Mexicans being shot by drug gangs within their borders, so they don’t die?

If Mexico wants to help their citizens, they should do a few things first. Eliminate the influence of drug smugglers from the government, including its police and military. Create an economic system that is not dependent on illegals in the US sending billions of dollars a year back to Mexico, and give them this map instead. 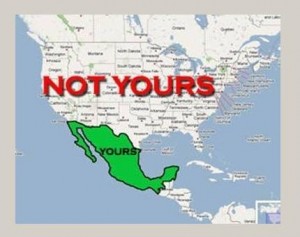 Meanwhile, we will do all we can to limit immigration to legal immigration, and make it impossible for an individual or business to hire illegals. Mexico has its own problems. Aside from the national security problem of an open border, we don’t need to worsen our economic and social problems (jobs, welfare, education, health care, anchor babies) by leaving the welcome mat out for illegals.