After only 10 years (only?) of obstructing from politically connected democrats in the State of Massachusetts like the Kennedys past and present, the Cape Wind project met its last hurdle when on April 28, 2010, U.S. Secretary of the Interior Ken Salazar announced his approval of Cape Wind with a favorable Record of Decision for the project to be constructed on Horseshoe Shoal in Nantucket Sound off the coast of Massachusetts.

This marks not only a first for wind energy in the United States, but real progress in green energy and green energy jobs. The project’s approval also means a boost for Pensacola’s GE who will be manufacturing hundreds of turbine generators for Cape Wind.

Screen capture from a Times Square web cam below. The suspect vehicle is the black SUV at the bottom of the picture. 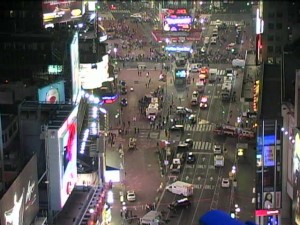 Illustrating the level of denial of the war on terror and just who the enemy is, and/or the extent to which some in the administration and progressives are quick to seek political advantage at the expense of Americans in Times Square by positing the notion that the perpetrator was likely a tea party person or some right winger who doesn’t like Obamacare.

“If I had to guess 25 cents, this would be exactly that: homegrown, or maybe a mentally deranged person, or somebody with a political agenda that doesn’t like the health care bill or something. It could be anything,” Bloomberg told Couric. “There is no evidence here of a conspiracy, there is no evidence that it’s tied into anything else. It looks like an amateurish job done by at least one person,” he said.

And just to make you feel safe,   Janet Napolitano, the homeland security secretary — described it as a “one-off” saying ‘there was no evidence of a continued threat to the city.’  That’s good news. What? Did bin Ladin and alQaeda give up? New Yorkers no longer have to worry about another attack?

What are your anonymous thoughts? Here’s a totally politically incorrect poll. On this poll you can check more than one box.  May want to keep it handy the next time we are attacked.