Did you ever read a news piece and immediately recoil with a big WHAT? It’s been happening more often nowadays but if this doesn’t sound like DHS/Frankenstein on immigration or some such, I don’t know what else could. Attempting to stop the bleeding here (Mexican Border), while we make this incision on your jugular here (Syria).

Homeland Security is looking to hire people to go to Syria to sign up ‘refugees.’ I’d like to know why importing terrorists has become a priority while we are fighting a war to keep them out?

And if a threat level Yellow (Elevated) isn’t enough to adequately protect the U.S. border at Mexico, what does it have to be to stop operating from within a state sponsor of terror and puppet of Iran?

Try this headline: U.N. Wants NYC Cops for Peacekeeping.Â  UNITED NATIONS (AP) – Secretary-General Ban Ki-moon asked New York Mayor Michael Bloomberg on Wednesday whether some of the city’s police officers could be deployed with U.N. peacekeeping missions.Â Â  Will somebody name just one successfulÂ “U.N. peacekeeping mission”?Â  I’m having a hard time coming up with one.

Eight months after posting an article about the biased reporting in the news accounts of Hezbollah’s attacks on Israel compared to how an Israeli response is reported, a user (Robert) comments to complain about the picture. But what got this user’s goat (politically correct too!), were these pictures of men with boobs from Debbie Schlussel’s blog. As luck would have it, another user (Ali) made a thoughtful response that I want to share. 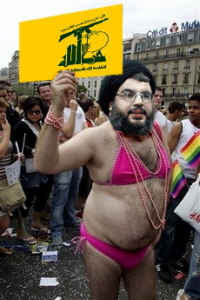 So you don’t like the picture? Where’s your sense of humor? Karachi? I thought it was funny. I’ve got others you might like. They show people burning flags of the US, and some of that in Israel too. Oh, and then those nasty pics of the bus explosions, but they’re not doctored, they are real. What would you say if I told you pics like those are all over the world too? You’re going to be busy searching for them and expressing your taste, or distaste for them.

The doctored picture you don’t like, and there are more from Debbie Schlussel’s website, just follow the link. But the picture is making a point that the Hezbollah terrorists (do you believe they are terrorists?) are cowards, or ‘girlie-men.’ Not the brave soldiers and wise statesmen they show themselves to be in some of the media on this planet. I hope I haven’t lost you already, because here’s where it gets good. IMHO,tossing missiles and blowing up your own children to kill other children is about the essence of cowardice. It’s called illustrating a point through absurdity. Men with breasts, in this case. So, the picture sort of depicts that. Clever huh? Don’t they have personal freedoms like this where you come from? Robert. 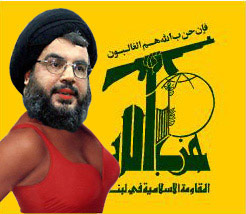 If you read her explanation you’ll see it was sort of an art project. But here is Debbie’s explanation about those pictures:

“But, actually, it’s kind of a redundant phrase. Hezbollah men might as well have breasts–women’s ones–because they are the biggest girlie-men on the planet. They’re not brave. They’re cowards. So I asked our master, in-house photo-shopper David Lunde to put together some pics of what Hezbollah’s “men” are really like.

I added the graphics for added visual effect. Well that and to improve understanding in the world.