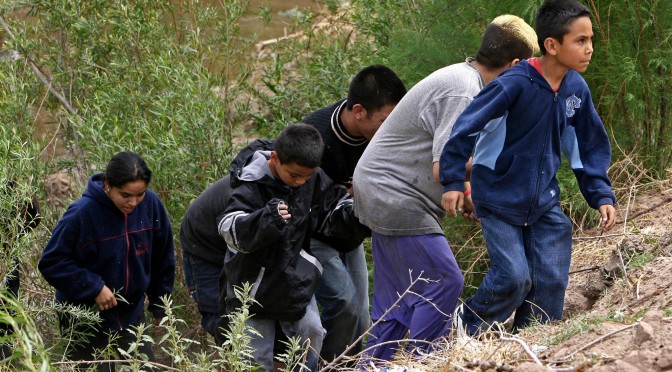 Listening to the political Left, like HIllary Clinton and lefty talkers like Alan Combs, you would think the flow of illegals into this country has improved. If by improved you mean decreased.

They’re now claiming a net zero flow. Even if true, which it is not, they are not claiming that illegals are no longer coming into the country. So that’s supposed to make us feel safe and secure?

Here are a few things a wall and enforcement would do.

The surge of illegal and unaccompanied children is ramping up again. This summer it is worse than in 2014. Not better.

Yuma, Arizona is on our southern border. Far from Washington DC and New York City.  Here’s a couple articles from 5/28/2016, that is in the news down there.

Sexual Predator Nabbed at the Border,

On Tuesday, Agents from the Deming Station were patrolling an area east of Columbus, N.M. when they were alerted to five subjects who crossed the international boundary from Mexico. The area is a known illegal immigrant and drug smuggling corridor.

During processing it was discovered that 34-year-old Mexican national, Juan Antonio Canales Martinez, had a prior conviction for “Sex with a Minor” in California, along with other criminal charges

Smugglers abandon women and children in the brush

U.S. Border Patrol agents assigned to the Rio Grande Valley Sector saved the lives of a man, a women and a 3 year old who were abandoned by their smugglers in two separate incidents in the last 24 hours.

“These heartless smugglers left a woman and child helpless and lost” said Chief Patrol Agent Manuel Padilla Jr. “this reinforces the message from our Border Safety Initiative, “smugglers view little regard for the safety of migrants.”

Bridges are not what is needed. Despite what Hillary Clinton keeps saying.  We already have “bridges.”  And they’re not working to keep illegals, terrorists, and human traffickers out.

On top of the human cost described above, there are also social costs incurred with illegal immigration and sanctuary cities.

Putting Americans first must be our priority. Starting with enforcing immigration laws and re-establishing our southern border. After all, protecting the American people, not illegals, is the main responsibility given to the federal government. It is the oath all elected officials have taken. There’s nothing controversial about that.