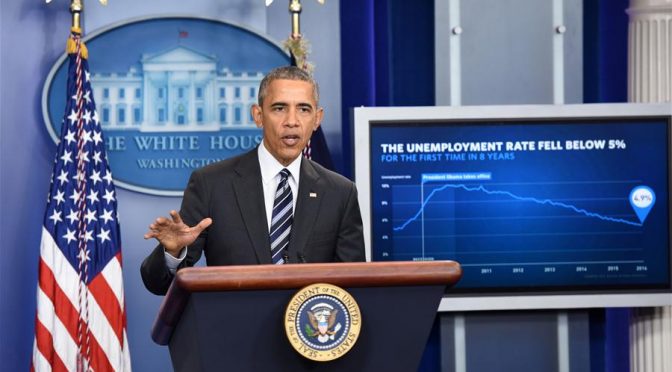 Pictured above, in front of a graph that shows unemployment below 5%, realize that the real number, not the BLS massaged number, is 9.7%. The BLS calls it the U-6.

Meanwhile President Obama touts 74 straight months of private-sector job creation. Good choice of words. “Creation.” He couldn’t use the word “growth.” That’s because it takes over 250,000 jobs to “break even” with population growth and retirements. Anything less than that is a net loss. Hence, record number of people out of work since Jimmy Carter.

The Media’s inoculation of President Obama

Accounts of our soldier killed in Iraq yesterday begin like this, “the first US casualty since military forces have gone in as advisors . . . ”

By contrast, under the previous administration, every account of the war began with “President Bush . . .” and “Bush’s war . . .”

And all this is happening when, under Barack Obama, our military is at its smallest and the rules of engagement are, in terms of keeping our service members safe and in defeating the enemy, ridiculous.

After data came to light that $100’s of millions had been spent on First Family vacations during a recession, Mrs. Obama’s unpopular new regulations that changed food in America’s schools and other negative news including the disastrous Obamacare roll-out & website mess, Jay Leno took his comedy to a new level and his ratings skyrocketed – none of the other comics were so bold.

NBC couldn’t tolerate the fact that Leno’s jokes about Obama were always right on target about the first black president… and left-leaning executives at NBC were being harassed by Obama himself who thought the comedy was a racist attack on him.

“I was going to start off tonight with an Obama joke, but I don’t want to get audited by the IRS.”

On NSA surveillance: “We wanted a president who listens to all Americans – now we have one.”

On a new IRS commissioner: He’s called ‘acting commissioner’ because he has to act like the scandal doesn’t involve the White House.”

On closing the Guantanamo prison for terrorists: “If he really wants to close it, turn it into a government-funded solar power company. The doors will be shut in a month.”

“The White House has a new slogan about Benghazi: Hope and change the subject.”

“It’s casual Friday, which means that at the White House, they’re casually going through everybody’s phone calls and records.”

“It is not looking good for President Obama. Today his teleprompter took the fifth.”

“Fox News has changed its slogan from ‘Fair and Balanced’ to ‘See, I told you so!’

On Obama’s commencement address: “He told the young graduates their future is bright unless, of course, they want jobs.”

On a Chicago man who set a record for riding a Ferris wheel: “The only other way to go around and around in a circle that many times is to read the official report on Benghazi.”

On White House claims of ignorance on the scandals: “They took ‘Don’t Ask, Don’t Tell’ out of the Pentagon and moved it into the White House.”

Now the last and possibly the best…..

“These White House scandals are not going away anytime soon. It’s gotten so bad that People in Kenya are now saying he’s 100% American.”