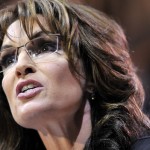 Gov. Palin was right to call the GOP establishment for gloating over recent primary battles. Instead, they ought to be trying to figure out what they need to do to gain their support. For without it, the Dems will prevail, and the Republican party and our country will become irrelevant in coming years. Of course, this presumes that the GOP establishment is not in bed with the Democrats on crony capitalism like the U.S. Chamber of Commerce is.

Either for lack of the intestinal fortitude it takes to stand on principle, or the spigot of corporate money flowing their way has overcome them, it is the GOP establishment that has thrown away the conservative principles that they once held. The very same principles that gave them the record victory in the House and other elected positions in all 50 states.

The Chamber of Commerce, or the Chamber of Crony Capitalism as Mark Levin calls them, has made it clear whose side they are on. As if to say that the tea party is not pro-business, they are putting their money on candidates that will support the cronyism of the day. Economic freedom and the country be damned.

At the time, the U.S. Chamber of Commerce blamed tea party lawmakers for the economic damage caused by the government shutdown and vowed to pour money into campaigns to elect pro-business moderates against tea party candidates. The group said it would spend at least $50 million on campaigns to support centrist GOP candidates in 2014.