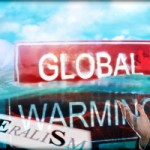 Was perusing a lefty website hosted by a big climate change (or is it global warming?) the-earth-is-burning-up liberal Mike Papantonio. It’s a good site to visit to see what the wacko left is up to. And get a measure of their level of desperation.

Featured in this article is an artist’s rendering of what some cities might look like after a (wait for it) twelve-foot rise in sea level. Personally, I’d like to see the 25 foot version. Nevertheless, the purpose is to scare the daylights out of you based on a cartoonist’s rendering with a dash of science fiction.

Now for a sixth grade science class experiment. Ready? Fill up a glass with ice and water. Lots of ice. Fill it to the top of the glass. Now leave it at room temperature so the ice will melt. If you believe Mike Papantonio and the wacko left, the cup will overflow, similar to how the sea level will allegedly rise.

I’ll bet you a cheesesteak the cup does not overflow after all the ice has melted. Obama said he would lower the sea level. What a genius.