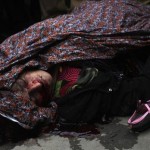 An update about the ancient and barbaric ‘religion of peace.’ If you think Mo’s barbaric religion was something that happened centuries ago, think again. Just because it isn’t reported in the U.S. media doesn’t mean it isn’t still happening. Talk about a war on women . . . her name was Farzana Iqbal. Twenty-five years old, and three months pregnant.

“I killed my daughter as she had insulted all of our family by marrying a man without our consent, and I have no regret over it,” Mr. Mujahid, the police investigator, quoted the father as saying.

Link: Pregnant woman stoned to death by her family – The Globe and Mail.