Although Trayvon Martin’s past has nothing to do with events on the night he met George Zimmerman, it is relevant on the subject of profiling. What was Trayvon doing in Sanford, since he lives in Miami Gardens? Having time off from school, being suspended for 10 days, he went to 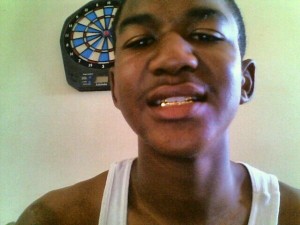 Sanford to stay with his father. Just one of multiple school suspensions for Trayvon. George Zimmerman wasn’t the first person to think that Trayvon Martin was acting “suspicious.”

In October, a school police investigator said he saw Trayvon on the school surveillance camera in an unauthorized area “hiding and being suspicious.” Then he said he saw Trayvon mark up a door with “W.T.F” — an acronym for “what the f—.” The officer said he found Trayvon the next day and went through his book bag in search of the graffiti marker.

Instead the officer reported he found women’s jewelry and a screwdriver that he described as a “burglary tool,” according to a Miami-Dade Schools Police report obtained by The Miami Herald. Word of the incident came as the family’s lawyer acknowledged that the boy was suspended in February for getting caught with an empty bag with traces of marijuana, which he called “irrelevant” and an attempt to demonize a victim.

Nothing against Trayvon or his parents who lost their child in the most unfortunate circumstance, but for Martin family attorney Benjamin Crump to say “Trayvon Martin will forever remain in the annals of history, next to Medgar Evers and Emmett Till as symbols for the fight for equal justice for all,” using Trayvon and raising him to the level of Medgar Evers in a civil rights struggle is, or should be, an insult to him and his parents.