Next time you hear a politician (take your pick) say how alQaeda is “on the run,” they want you to believe that they are running away. I don’t see any evidence of that. Do you? If anything, the direction is towards us, not away. 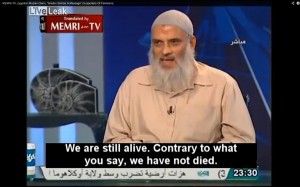 Aside from Allah calling for the destruction of infidels in America, the Egyptian Muslim Cleric in this interview also has a commentary of America in general. Says that “America will collapse on itself” from its “huge debt” and “spreading poverty.” Apparently he didn’t get the memo. What appears to be a collapse to him is part of the “transformation” our President had in mind.