A complete list with profiles of the 32 black Republicans who are running for office as of April 2010 was complied by the Frederick Douglas Foundation. 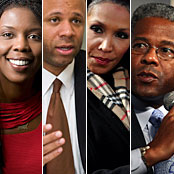 “Where justice is denied, where poverty is enforced, where ignorance prevails, and where any one class is made to feel that society is an organized conspiracy to oppress, rob and degrade them, neither persons nor property will be safe.”
– Frederick Douglass –

We have decided to be proactive and acknowledge the overwhelming number of Black Republicans running for office in 2010 and we need your help.

If you are or know of an individual running for public office in 2010 at the county, state or federal levels, we are asking you to complete the form below.

Once a week, we will update and post the latest listing of candidates and their contact information.

Let everyone in your district and the country know you are a candidate so they can support your efforts.