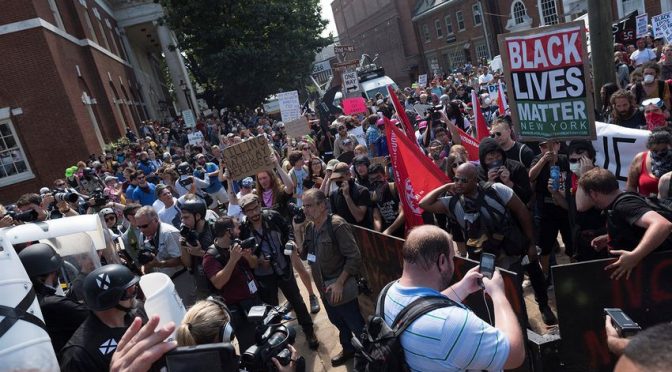 Post Charlottesville, a teachable moment has presented itself in how the media and their tools, that would be the Democrat Party, work.  As described HERE, what happened in Charlottesville was in no way representative of the people who live there, Virginians, or Americans in general.

Another thing you can count on is the reaction from the media and party activists like Mary Anne Marsh. They see everything from their identity politics prism. They do not see America in a macro sense like Trump and most Republicans do, as Americans within a border. They only see many disparate groups of people as victims. And as such, present themselves as the solution to those affected and, or course, Republicans as the reason for their troubles.

This is the reason the media and agitators like Mary Anne Marsh rush to the TV camera and mic to call out President Trump for what he did not say. You see, if you call out the violent behavior as perpetrated by “many sides,” which was the case, then you are accused of being supportive of a group who participated in the violence that they choose to name.

Make no mistake about the reason for their faux outrage and bogus accusation. That Trump is protecting those people “who supported him” in the presidential campaign by not calling them out. See, the way Barack Obama operates, you call them out right away, before you know the facts. Well, unless they were Islamists, then we caution not to jump to conclusions. Remember how the “police acted stupidly,” and Trevon Martin was so innocent and, if he had a son would have looked “like him?” This is how Democrats are programmed. It’s in their genes, jeans and panties.

So when Mary Anne Marsh says oh, President Trump did not say that he condemned Neo-Nazis, or Racists, or Fascists, that it is because they are supporters of his, and that makes him a proponent for same. As if any candidate can control how someone votes and who they support. Democrats do control how dead people vote, but that’s another story.

But it doesn’t stop there. The meme has to be to connect not only Trump to these racists, but everyone who voted for him too. She listens to David Duke, like she listens to Kim Jong-un, when the racist Duke says that Trump was fulfilling his commitment to America. In her and the media’s little mind, that is a “dog whistle” that means he supports racists and anarchists; not creating jobs, boosting the economy, or protecting our national security.

Confirming all of that, is her assertion that “Most of America is starting to turn their back on Donald Trump . . . the world, and Republicans.”

None of which could be further from the truth. Bottom line, this is how they roll, and, hopefully will lead to the irrelevance of the Democrat Party, where the haters really are.

Mary Anne Marsh: “Most of America is starting to turn their back on Donald Trump.” pic.twitter.com/5EGfBidp4a