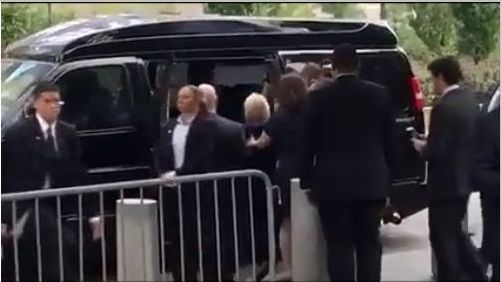 Talk about Karma. Four years to the day that Hillary Clinton lied to the public about Benghazi in advance of a presidential election, she has a seizure and loses her shoe in public. Still lying in advance of an election.

She didn’t pass out because of the heat. First of all, there wasn’t any heat. To the point though, when you pass out, you’re out, and you lay the victim down. That’s not what we see here.

Who’s unfit again? Trump does 2-3 cities a day. Hillary is lucky to do that in a week. Lacks the stamina to run the country, let alone attend a 9/11 ceremony. The White House is not an assisted living center, which is something Hillary Clinton should be looking at.