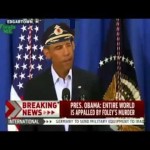 In case you missed it, President Obama made a sobering statement about the beheading of James Foley by ISIS. He told the world what bad people they are. What he didn’t do is say what he is going to DO about it. This is as close as he came to a non-commitment commitment.

“We will be vigilant and we will be relentless,” he said. “When people harm Americans, anywhere, we do what’s necessary to see that justice is done. And we act against ISIL, standing alongside others.”

Apparently, he is waiting for “others” to take the lead.

What he did however,  is immediately returned to the golf course. While our borders are open, the last thing this sorry excuse for a president wants to do is protect and defend the Constitution and the people of the United States. Here’s some great advice he’s not been getting.

‘Get Your Ass Off The Golf Course, Act Like a President, or Get the Hell Out!’