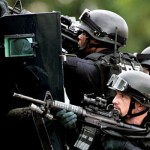 As dozens of federal agencies now have Special Weapons and Tactics (SWAT) teams, further expanding the definition of their missions, military-style units from government agencies are wreaking havoc on non-violent citizens.

It’s not controversial that the Secret Service and the Bureau of Prisons have them. But what about the Department of Agriculture, the Railroad Retirement Board, the Tennessee Valley Authority, the Office of Personnel Management, the Consumer Product Safety Commission, and the U.S. Fish and Wildlife Service? All of these have their own SWAT units and are part of a worrying trend towards the militarization of federal agencies — not to mention local police forces.

Other agencies with armed divisions include the Bureau of Land Management, the Coast Guard, the National Oceanic and the Atmospheric Administration, the U.S. Park Service, the Library of Congress, the Federal Reserve Board, and the National Institutes of Health. These federal agencies employ armed officers with arrest authority, according a federal report, which is based on the 2008 Census of Federal Law Enforcement Officers.

Allen B. West has an interesting take on this subject.

Enabled by lies and deceit, could it be that liberal progressive socialism only works by fear, intimidation, and coercion? Or is Obama more afraid of the American people than our enemies abroad?

I find it humorous that liberal progressives accuse their opponents of being fascists, but the liberals are actually the most intolerant and oppressive when it comes to free speech, expression, and petition of redress of grievances by the American citizenry.

It’s no secret that the federal government has been buying up billions of rounds of ammunition in recent years. And still is. What remains to be answered is, who is the Obama administration planning to wage war on? Why haven’t we heard some justification from the administration for the militarization of federal agencies that have nothing to do with law enforcement?

Is this what Obama meant when he talks about “civilian security?”

Links: The United States of SWAT?  |  Why is Obama decimating the military while arming federal agencies?