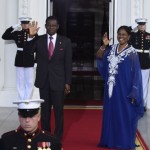 and his wife Constancia Mangue De Obiang. Like his dictator uncle before him, President Obiang kills or jails political opponents. Wins elections with 99% of the vote, and there is no freedom of the press.

In another time, not so long ago, people around the world suffering oppression or genocide from evil dictators, could look and would look to the United States for help. Because we could help, and because we would help. We’ve been involved militarily to free people, not to take their land, but to free them from those kind of situations.

That was before we elected a President who’s mission became knocking America down to size, withdrawing from world affairs both militarily (in a way that supported our enemies) and morally (by ignoring security agreements with Ukraine).

Out to “improve” our image around the world, President Obama has successfully made that image into a country willing to watch the rest of the world go to hell in a hand basket, while turning our own society into a basket case, by a combination of no border enforcement and increasing the number of government-dependent citizens (usurping 20% of the private sector economy) with the lowest worker participation rate since the Jimmy Carter era.

Two current, and glaring, examples is when President Obama opened up The White House to host Africa’s worst despots and dictators. Correctly described as the “Monster’s Ball.” But not by any of the U.S. media. Imagine the hopes of the poor Africans being dashed when they see the president of the United States having a dinner party with the people directly responsible for their misery.

Then there is 40,000 religious minorities (Christian and other non-Islam), that have been literally chased to a mountain top by ISIS in Iraq, where ISIS says they will either starve to death or come down and be shot to death, unless they agree to convert to Islam.  This is the same group that the world (and President Obama) watched roll unopposed into Iraq in convoys to take it over after our departure. The world also watched Obama refuse (by stalling) Iraq’s request for air strikes on ISIS at a time when it would have been most effective. After all that we accomplished and sacrificed there.

America’s response isn’t to use our air-power to clear out ISIS to free those people. Obama’s response is to air-drop food to them. And threaten to use force IF ISIS attacks any U.S. installations left in Iraq. Apparently, America is now OK with the genocide about to take place.

This is Obama’s America. Is this the new America? The America Michelle Obama can be proud of? There you have it. MISSION ACCOMPLISHED!