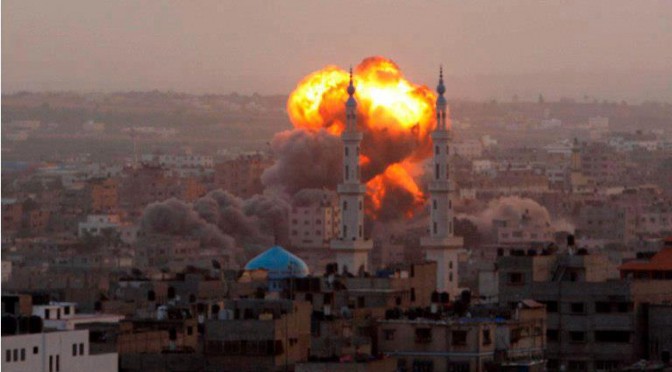 Weak-kneed politicians, like President Obama and Sec. of State John Kerry asking for Israel to cool it, are showing their ignorance and/or incompetence on the world stage where war is concerned. And casts doubt on how they might react if the United States was under attack like Israel has been. Leaving open borders already casts doubt on their idea of national security.

Recently, Joe Scarborough brought attention to himself on his ‘Morning Joe’ show for comments he made about Israel’s actions in Gaza. People, he said, just mis-understood what he meant. So he made it more clear yesterday.

He still contends that Israel is making their case (their case?) worse by fighting back. He’s forgotten what war is. Yes Virginia, wars still exist.

Well, I think it’s simple enough but, Gene, let’s talk quickly about how Hamas, this is a great tragedy after the humanitarian crisis, Hamas, I saw some polls that said over 80 percent of people in Gaza hated Hamas, wanted them out. They were forced to strike a deal with the Palestinian authority. Egypt is against them. Saudi Arabia is against them. U.A.E. is against them. You go down the list. Jordan is against them. They were isolated. This is only serving to prop them back up and it’s the last thing in the long run that Israel needs.

Polls saying that 80% of people in Gaza “hate” Hamas belies the fact that, knowing Hamas’ goal of eliminating the Jewish State (Israel), those people in Gaza elected Hamas and put them in power.

As I recall, it was the PA that had an election there. It was the PA that also knew what Hamas was all about, and that the majority of people in Gaza were Hamas sympathizers. The PA knew what the outcome would be. They got what they expected. Which makes it simpler for Israel to deal with. They’re not responding to a radical minority, they’re reacting to an elected government that wants them all dead.

Gaza (Hamas) wages war on Israel, so Israel engages in war to defend themselves. In a war, civilians also pay the consequence. Besides Israel’s measured response, there are no “innocent civilians.” They are, by definition, Israel’s enemy.

How quickly we forget how hundreds of thousands, or millions, of people (innocent civilians) were killed during WWI and WWII. No one was bellyaching about “the children.”

There will never be peace in that region until one side wins, and the other side either gives up or dies trying.