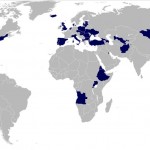 Why is there no “coalition of the willing” to deal with ISIS and terrorism this time?

I’ll tell you why.

Bottom line, Obama broke it. It’s his problem to fix.