Helping to make our birthday’s possible, and our nation secure. May we never forget the sacrifices they made and make every day. 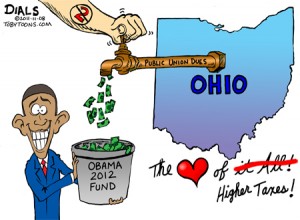 A ‘mother’ of two uses her children as human shields to block the entrance of a convention center in Washington. Where do you suppose that came from?

This is just too funny. The Occupy Portland bunch announced over the weekend that they have an outbreak of head and body lice.

Had a blast, literally, at the Blackwater Tactical Range today. Sheriff David Morgan’s “Out-Shoot The Sheriff” fundraiser proved to be all I thought it would be. FUN!

The challenge was to hit 10 steel plates in the least amount of time. I didn’t out-shoot him. In fact, nobody did. So the guy who came closest won the t-shirt.

He said there was going to be a machine gun demonstration, and there was. I didn’t pass up the chance to fire an M60 machine gun, and a Thompson sub-machine gun. Shot a lot of dirt, made a lot of noise. Would have made ‘Tim the toolman’ proud.

And as an added bonus, there was a little explosion demonstration. If you’ve seen the TV show Top Shot, you’ve seen exploding targets. An instructor hit a can containing some explosive material with one shot. Boom!

It was a unique fundraiser for an elected office. One I couldn’t pass up. If you didn’t have a weapon, eye and ear protection of your own, they were provided. There was just as many women shooters there as there were men. A few women shot the machine guns too!

Thanks to our veterans, active duty military, and our Constitution, I could fire one of those without my life having to depend on it like our brave men and women in the military have to do every day of the week in war zones far away from home.

And thanks to Sheriff David Morgan for hosting the event. A great time was had by all.

What is it with the Left’s fascination with what conservatives wear? Now The Daily Beast has a columnist of a certain persuasion that has a problem with what Herman Cain is wearing.

First there was Sarah Palin’s wardrobe and who paid for it. Now, Beast writer Robin Givhan, seems to have a new attack on Herman Cain because of what he likes to wear. At least for now, she is not concerned with how much his clothes cost.   For a style and culture writer, she seem to be ignorant of the cultural south, where Mr. Cain grew up.

But in her case, Givhan seems to be shuffling racial cards where Mr. Cain is concerned. What’s next from the Left? Anything to shift the focus off of Obama’s successful policies that are killing free-market capitalism, our economy, and your job.

In 1913, the 16th Amendment to the Constitution, which gave the government the authority to tax people’s income (up to 100% of it), was sold to the public as only taxing the rich. Sound familiar?

By 1913, 36 States had ratified the 16th Amendment to the Constitution. In October, Congress passed a new income tax law with rates beginning at 1 percent and rising to 7 percent for taxpayers with income in excess of $500,000. Less than 1 percent of the population paid income tax at the time.

There is a growing number of Americans who pay zero federal income tax after taking advantage of deductions and credits.  This, a result of morphing the income tax system into spending programs during the Clinton administration. The number of Americans in this group has increased by 35%. Up from 43.4 million people in the 2006 tax year to 58.6 million in the 2009 tax year.   No doubt due to record unemployment and more wealth-spreading going on.

Prior to The Taxpayer Relief Act of 1997, tax relief was generally given in the form of lower tax rates or increased deductions or exemptions. But the 1997 Act  launched the modern proliferation of individual tax credits and refundable credits that are in essence spending programs operating through the tax system.

When more people don’t pay taxes than pay taxes under the current system, why would anyone think that these non-payers would vote for anyone who would make them pay a ‘fair’ share? Similar problems are bankrupting European countries over benefits. Reforms there means taking benefits away.

These findings raise serious questions about the future of the U.S. income tax system, and the possibility of base-broadening tax reform when the majority of the federal tax burden is borne by a shrinking pool of taxpayers.

I got your base-broadening tax reform right here. It’s called the FairTax and it is what ‘Phase 2’ of Herman Cain’s economic plan is all about. It broadens the tax base from 140 million people to every living human being within the borders of the United States. Under the FairTax, the tax base includes our population of 320 million, plus foreign tourists, diplomats, and illegal aliens. You can’t get a broader tax base nor a better stimulus for job creation, economic growth, personal economic security and national economic security.

Graffiti on the wall of the Sun Trust building in downtown Pensacola is the first evidence that the peaceful protest is turning the corner into something less so.

Credit to RicksBlog for bringing the first signs of protest vandalism to our attention. No one has claimed credit for it yet, but I agree that this was the work of the Occupy Pensacola crowd camping out at City Hall.

Not counting the increase cost of law enforcement put upon taxpayers to babysit them, should we consider ourselves lucky that damages for the graffiti only total $2,000? Since there are arrests and rioting elsewhere in the United States, I guess we should.

But keep in mind, they are new at this. With a little help from labor unions, I’m sure they can be even more destructive to public and private property. It is what BIG LABOR wants.

If we are really serious about movement building then we think one part is we have to act heroically. That we have to inspire people by our actions and we have to be willing to take incredible personal and collective risks.

And that’s the time and there’s moments where history shifts and we’re going to decide if it shifts.

The protesters have a list of things they want you to contribute to sustain the encampment that they can’t sustain on their own.

Pensacola News Journal columnist Troy Moon wrote that these protesters are not unlike your neighbor. Just regular people. If they are like my neighbors, they would gladly pay for the damages that their kids created. So if you are inclined to send monetary support to this group, be sure to designate that it is to cover the damage and to reimburse the city, not to buy cans of spray paint. And Troy could write about how responsible your neighbors are.

Sen. Majority Leader Harry Reid (D-NV) said this on the floor of the Senate.

“It’s very clear that private-sector jobs have been doing just fine; it’s the public-sector jobs where we’ve lost huge numbers, and that’s what this legislation is all about.”

It is with some reservation that Sen. Reid wins the Most Ridiculous Item Of The Day award. Not because he isn’t deserving of it, but rather that as a conservative, I have some compassion for my fellow-man. He might have some mental health issues for making such a statement and need professional help.

Link: A Moment of Candor From Harry Reid

Big news in Colorado. The 2008 election made Colorado a Blue state for the first time in 15 years, Obama 54% McCain 45%, buoyed by the support of the state’s growing Hispanic population, a key demographic to victory in 2012. So you would be surprised to see that 63.5% of the voters rejected Proposition 103 Tuesday.

Prop 103 was a $2.9 billion tax increase in sales and income taxes to be used for schools. I think this marks the first time that the ‘it’s for the children’ excuse has not worked. The people of Colorado feel they are paying enough taxes already and expect the state to do the job with what they have.  A notion contrary to liberal dogma.

“We need to do this for our kids,” said Heath, D-Boulder. “Our kids can’t wait.”

“This is a victory for all Colorado taxpayers,” said Senate Minority Leader Bill Cadman, R-Colorado Springs. “We can’t help children by bankrupting their parents.”

It looks like ‘it’s the economy stupid’ is paramount in the minds of the people of Colorado and spells trouble in 2012 for an administration that only wants to raise taxes more.