Cape Wind, the nation’s first offshore wind farm is up and running after battling a decade of government reviews, court battles, and the Kennedys.

Problem now is in finding customers to purchase their electricity.

Take a look back to what it might have been like if Joseph and Mary had some of today’s social networking technology.

The younger folks may not know of Buddy Hackett, but his comedic genius in telling jokes is evident in this clip from an appearance on The Tonight Show with Johnny Carson. A city guy and a farmer settle an argument ‘country style.’

It was entertainment night at the Senior Center.

Claude the hypnotist exclaimed: “I’m here to put you into a trance; I

intend to hypnotize each and every member of the audience.”

The excitement was almost electric as Claude withdrew a beautiful

antique pocket watch from his coat. “I want you each to keep your eye on

The crowd became mesmerized as the watch swayed back and forth, light

gleaming off its polished surface. Hundreds of pairs eyes followed the

swaying watch, until, suddenly, it slipped from the hypnotist’s fingers

and fell to the floor, breaking into a hundred pieces.

It took three days to clean up the Senior Center.

~DEATH~
WHAT A WONDERFUL WAY TO EXPLAIN IT ….

A sick man turned to his doctor as he was preparing to leave the examination room and said, ‘Doctor, I am afraid to die. Tell me what lies on the other side.’

The doctor was holding the handle of the door. On the other side came a sound of scratching and whining. And as he opened the door, a dog sprang into the room and leaped on him with an eager show of gladness.

Turning to the patient, the doctor said, ‘Did you notice my dog? He’s never been in this room before. He didn’t know what was inside. He knew nothing except that his master was here, and when the door opened,  he sprang in without fear.

I know little of what is on the other side of death, but I do know one thing… I know my Master is there and that is enough.’ 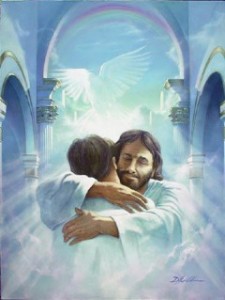