Promising to do more to advance socialism in Venezuela, the hemisphere’s idiot, Hugo Chavez , started on Sunday by announcing the expropriation of land owned by the Venezuelan agricultural company Agroislena and vowing to hasten the nationalization of land held by the British meat products company Vestey Foods Group.

Meanwhile, with his slim 48.9% to 47.9% victory, Chavez is pushing the notion of issuing firearms and training for a civilian militia.

Chavez says the militia should be prepared to defend the country against any threat, foreign or domestic. He also believes the United States poses a threat to his oil-exporting country.

Opponents of the leftist president say the militia is essentially a personal army for Chavez aimed at intimidating his adversaries, maintaining control and keeping him in power. 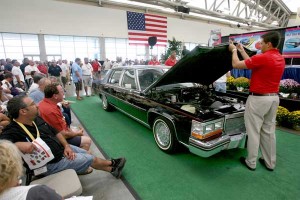 The late and great mayor of Philadelphia, Frank Rizzo’s 1980 black Caddy sold at the Wildwood

Classic Car Auction on Saturday, September 25, 2010. Mayor Rizzo was the kind of guy who you either loved or hated. And when he retired after 8 years as mayor of Philadelphia in 1980, he successfully cleaned up the city’s crime problems. Which accounts for why he was either loved or hated. According to his son, Philadelphia Councilman Frank Rizzo, the proceeds of the sale would be used to take care of maintenance of his father’s statute that stands outside the Municipal Services Building long after he is gone.