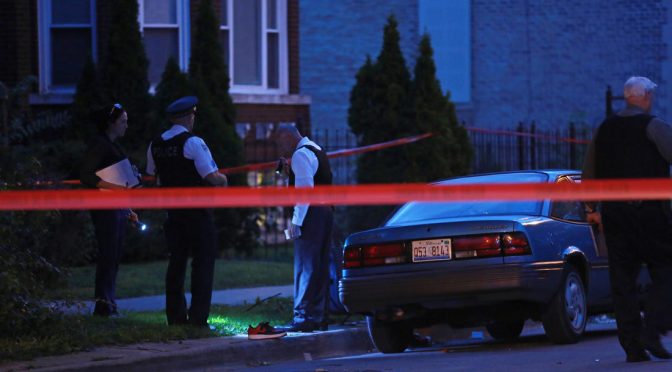 65 people killed in Chicago in July, a toll that pushed the number of homicides in the city this year to nearly 400.  The total for all last year was 490. By comparison, total U.S. casualties in Operation Enduring Freedom for this year is 5.

It was the deadliest July since 2006, when 65 homicides were also recorded, according to Chicago Police Department records.  Police Superintendent Eddie Johnson noted that the month was still lower than June, when 72 homicides were reported.

That was for July. In less than a week for August, between last Friday afternoon and early Thursday, at least 99 people were shot in the city, 24 of them fatally.  At least nine people were killed on Monday alone, the deadliest day in Chicago in 13 years, according to Tribune data. Among the wounded that day was a 10-year-old boy shot in the back as he played on his front porch in Lawndale. That’s a 4:1 shoot/kill ratio.

Here’s a stunning statistic for you to ponder.  40 of the weekend’s shooting victims had been arrested 672 times.

Those killed over the weekend included 23-year-old Abner Garcia, an Army veteran with no criminal history, and 19-year-old Arshell Dennis, a college student whose father was a police officer. On Sunday, a 6-year-old girl became the third child under 10 to be shot in the past week, and a pregnant woman was shot in her chest.

When and how will it end? It won’t end until Democrats own up to the destructive nature that their feel-good social engineering is having on poor people; Black, White, and everywhere in between. Patrick Smith, the father of the  armed thug who was shot this weekend in Milwaukee, got one part of  the problem right when he said . . .

“Being on the street, doing things of the street life: Entertaining, drug dealing and pimping and they’re looking at their dad like ‘he’s doing all these things.’ I got out of jail two months ago, but I’ve been going back and forth in jail and they see those things so I’d like to apologize to my kids because this is the role model they look up to. When they see the wrong role model, this is what you get.”

If you believe that giving illegal aliens a drivers licenses will save innocent victims from their DUI and hit-and-runs, then I have a suggestion for cities like Chicago where gun violence is so prevalent. If just one innocent life could be saved . . .  Innocent lives would be spared if the thugs had better marksmanship skills with their illegal guns. If, through proper weapons training, we could get their efficiency closer to 1:1 than 4:1, then that little 6- yr-old girl would be alive today. It’s a win-win.