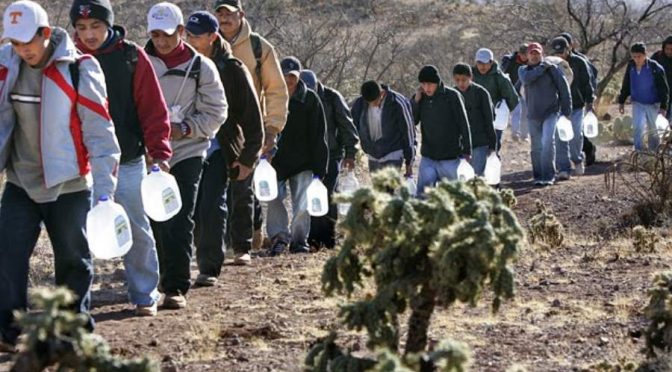 Last year, when CEO Trump mentioned the use of a “deportation force” to ostensibly deport the 11-30+ million illegal aliens already in the country, the opposition party (which included his republican primary challengers) ran with the demagoguery a la Adolph Hitler.

Now that the rubber is getting closer to hitting the road, what once looked like a police state actually has boiled down to something as simple as just enforcing current immigration laws.

As a secure border that will halt the illegal flow of humans and drugs is being established, law enforcement and the border patrol will be allowed, and empowered, to do their job. A 180 degree turnaround from the shackles put on them by the Obama administration and the Dept of Injustice.

As illegals (Visa overstays or otherwise) come into contact with them, they will be dealt with as the law requires. It is a kinder, gentler, way to deal with the illegal alien problem created by decades of neglect, and an administration breaking the law to break the law. It may take longer than a “deportation force” would, but the result will be the same. And, the American people will accept that as a more humane way to re-establish law and order and protect our economy, jobs, and culture. As illegals will not have sanctuary cities to run to, and won’t have employers that will hire them or landlords to house them, they’ll hit the road in one of two ways. Voluntarily return home, or as they come into the justice system, will be handled accordingly.

Those who may remain will be those who are somehow productive and, will be dealt with in a way yet to be determined. It should start by getting in line behind the immigration requests filed in accordance with our laws. To do that, they must come out of the closet and register themselves as an illegal, seeking to stay here under some earned legal status.

Assimilation is required. If they just want to use America instead of become American, then they will not meet the minimum requirement for the path to ‘citizenship.’

It will take as long as it takes for them to get their chance to become an amnestied American citizen. However many years that may take is what it will take. No jumping to the head of the line. And to remove the political motivation from the equation, amnestied American citizens will not have the right to vote in federal elections. After all, this is supposed to be a humanitarian issue, not a political one. A  small price to pay to stay and live in the United States of America.

We will learn more of what Trump’s immigration policy is about tomorrow. Will be interesting to see how it compares to mine.