As Black History Month (February) comes to a close, there is some Black history that relatively few people are aware of, but should be.

Since the 1960’s, the Democrats and public education have effectively re-written history to the point that Blacks born since that time do not know the truth about their history and that of the Democrat and Republican parties. Surprising news for many Americans, not just Black democrats.

Slavery is quite possibly the most influential issue underlying American politics from 1776 to 1865, and the single greatest issue in the formation of the Republican party. Slavery was an issue that caused a divide in the colonies. The humanity of it was so divisive, that the formation of a unified country was impossible without some solution. 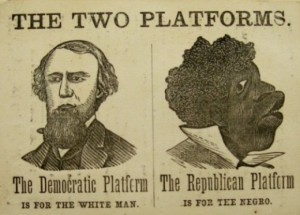 The Democratic Party was the party of white popular sovereignty in the North and plantation slavery in the South.  The short form is, the Democrat Party was the party of the four S’s: slavery, secession, segregation and now socialism. In its formation, slavery wasn’t something they wanted to abolish. Democrats of the day took a moderate position on slavery. They, as a national platform, said it was OK as long as the states wanted it.  By 1850, the Republican Party was formed as the anti-slavery party.  How it all shook out up to Lincoln’s assassination in 1865 is explained HERE.

Slavery, and the abolition of it, was so important that a Civil War was

fought over it. Frederick Douglass, the former fugitive slave and best-known African American spokesman wrote of his break with the apolitical and pacifist Garrisonians and his embrace of political abolition.  He was a supporter of the early Republican movement and during the Civil War helped mobilize northern blacks and freed slaves for the Union cause.  He campaigned extensively to recruit black regiments for the Union Army and agitated the northern public to support emancipation and civil rights for blacks.

Observing the standoff between Faubus and the federal judiciary, King sent a telegram to President Eisenhower urging him to “take a strong forthright stand in the Little Rock situation.” King told the president that if the federal government did not take a stand against the injustice it would “set the process of integration back fifty years. This is a great opportunity for you and the federal government to back up the longings and aspirations of millions of peoples of good will and make law and order a reality” (King, 9 September 1957). Aware that the Little Rock incident was becoming an international embarrassment, Eisenhower reluctantly ordered troops from the Army’s 101st Airborne Division to protect the students, who were shielded by federal troops and the Arkansas National Guard for the remainder of the school year. In a 25 September telegram, King praised the president’s actions: “I wish to express my sincere support for the stand you have taken to restore law and order in Little Rock, Arkansas. . . .You should know that the overwhelming majority of southerners, Negro and white, stand firmly behind your resolute action” (Papers 4:278).

Ignored today is this, it was Roosevelt who started blacks on the path to dependency on government handouts during the Great Depression with his “New Deal” that turned out to be a bad deal for blacks. Even though Roosevelt received the vote of many blacks, Roosevelt banned black American newspapers from the military because he was convinced the newspapers were communists.

Little known by many today is the fact that it was Republican Senator Everett Dirksen from Illinois, not Democrat President Lyndon Johnson, who pushed through the 1964 Civil Rights Act. In fact, Dirksen was instrumental to the passage of civil rights legislation in 1957, 1960, 1964, 1965 and 1968. Dirksen wrote the language for the 1965 Voting Rights Act. Dirksen also crafted the language for the Civil Rights Act of 1968 which prohibited discrimination in housing.

December 1, 1955, Rosa Parks claimed her civil right to exist which

It was Republicans that ended a filibuster by Democrat Senator Robert C. Byrd (former KKK recruiter), preventing a vote on this bill in the Senate. 82 percent of Republicans voted for cloture versus 66 percent of Democrats.

President Lyndon Johnson was no supporter of the Civil Rights Act of 1964. He also did not like the mass exodus to the Republican Party.

“These Negroes, they’re getting uppity these days. That’s a problem for us, since they got something now they never had before. The political pull to back up their upityness. Now, we’ve got to do something about this. We’ve got to give them a little something. Just enough to quiet them down, but not enough to make a difference. If we don’t move at all, their allies will line up against us. And there’ll be no way to stop them. It’ll be Reconstruction all over again.”

Seeing the exodus of Blacks from the Democrat Party in the wake of all the resistance to  freedom and equality for them coming from Democrats and, in an overall sense, to help to erase their foils of the past, the Great Society was the permanent payoff. And, the chain on the leg of poor Blacks and Whites to keep them on the Democrat Plantation.

Senator (later President) John F. Kennedy was opposed to the Civil Rights Act of 1957. As President, he was opposed to Dr. Martin Luther King Jr.’s March on Washington. He had his brother, Attorney General Robert F. Kennedy, also a Democrat, had the FBI investigate Dr. King for suspicion of being a communist. RFK also wiretapped Dr. King’s phone communications.

Democrats condemn Republican President Richard Nixon for his so-called “Southern Strategy.” These same Democrats expressed no concern when the racially segregated South voted solidly for Democrats for over 100 years, while deriding Republicans because of the thirty-year odyssey of the South switching to the Republican Party. The “Southern Strategy” that began in the 1970’s was an effort by Nixon to get fair-minded people in the South to stop voting for Democrats who did not share their values and were discriminating against blacks. Georgia did not switch until 2004, and Louisiana was controlled by Democrats until the election of Republican Bobby Jindal, a person of color, as governor in 2007.

The enforcement of affirmative action began with Richard Nixon‘s

1969 Philadelphia Plan (crafted by black Republican Art Fletcher
who became known as “the father of affirmative action”) that was
merit-based and set the nation‘s first goals and timetables. Nixon was also responsible for the passage of civil rights legislation in the 1970’s.

Democrats have not only invented but have perfected a tactic that could not be more successful politically, nor more divisive socially. Democrats prefer political success to your economic and personal success. It’s called ‘identity politics.’ If this is news to you, it breaks down like this. Divide the people into distinct and separate groups. No longer look at you as Americans, as one people. You are Black, you are Poor, you are Old, you are Female, you are Gay, you are Pro-Choice, you are here illegally. All of which the Democrats have a solution for, and all of which Republicans are cast as being against. But not only against their policy, but against you. Identity politics does two things simultaneously. Casts groups as victims, and casts the opposing political party as being evil, mean people. Their success depends on casting half of America as bad people. That’s where Democrats set their moral standard. Because of this, you see the families, especially in the minority communities, falling apart. The consequences of which is low income, low employment rates, and high crime. And encourages those on the receiving end of government programs to vote for the party that is cast as the ones giving them. You see, moving up and out of government dependency is not their goal.  It is the goal of the party (Republican) that detests identity politics. Convincing people to make that switch is a steep climb from where we are today.

There are many success stories of what can be done to unleash the human spirt and the potential in everyone. It starts with personal responsibility and hard work. The rewards are all there for everyone to reap.

Firsts of minorities in power, and empowered, are all over the Republican Party. The media just doesn’t like to point to them because, they have their own party and it starts with a D.  Supreme Court Justice Clarence Thomas, General Colin Powell, Sec. of State Condoleezza Rice, Gov. Bobby Jindal, Senator Tim Scott, Rep. Mia Love, Mike Hill, Florida State Representative,  Elbert Lee Guillory, Louisiana State Senator. This is not an all inclusive list, but you get the point.