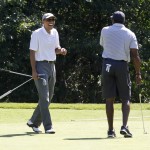 The “optics” of it all doesn’t mean anything any more. That is, when the media has your back. Let’s all marvel at how President Obama “balances world crises with golf and time off.” The implication is, of course, that everything is just fine on the world stage. Is that the way you see it? Regardless, this is the meme of the day/week/month/term. No never-ending cacophony of criticism that we were used to seeing.

Especially for Obama, who couldn’t have been elected without them. This is what “circling the wagons” looks like.