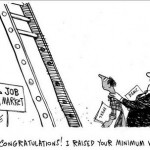 Got a note from my bud, the president, today. To help compensate for his lousy economy, he wants to make it even worse by increasing the minimum wage.  Further insuring that the long-term unemployed will stay that way. Because there will be fewer jobs to be had. Most of the jobs his economy has created so far are lower paying jobs in the food service and hospitality industries.

Barack, you have the power to lower the cost of living. So why don’t you? Instead, you want to continue to push costs up. Up in energy. Up in food. Up in transportation. Up in education. Up in public debt. And down in purchasing power. Give up on expecting the shrinking number of people who are still lucky enough to have a job (and yet unborn generations of Americans) to carry your share.

Hey Barack old buddy. This is the economy you created. There is no one to “give Americans a raise” you idiot. How about you give America the capacity to have a vibrant and robust economy once again? The employers will take care of the rest. Not you, and not the government.