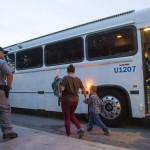 How not to secure your border. One would think that if we, as a country, are busing or flying any illegal anywhere, that it would be south instead of every other direction inside the United States. The Obama administration is hell-bent on open borders for the undocumented democrats they hope one day will be voting for them. They’re already aligned and used to a socialistic form of government. It is the kind of government that they are used to. So it isn’t a stretch to call them undocumented democrats when the Democrats start promising them free stuff. Stuff that those evil Republicans don’t want you to have. See how it goes?

And it is right out of the play book known as the Cloward-Piven Strategy. The strategy of forcing political change through orchestrated crisis. The “Cloward-Piven Strategy” seeks to hasten the fall of capitalism by overloading the government bureaucracy with a flood of impossible demands, thus pushing society into crisis and economic collapse.

Lawless administration aside, in a mid-term election cycle, this is what passes for immigration policy?

I’m all for keeping families together. Send them back to be with them.