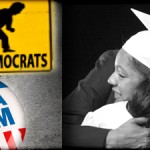 In case you haven’t heard, President Obama and Valerie Jarrett are saying (as justification for amnesty/Dream Act) that these kids coming illegally from Central America are America’s future. If that isn’t a WTF moment, I don’t know what is.

This is a statement you would expect to hear at a graduation ceremony at a high school, college, or university here. In this country. When these kids get that message, like they’re getting from their media in Central and South America, they’re thinking Yeah, let’s go.

Which brings to mind President Obama’s attitude about America. He feels America’s success in the last 200 years is a result of pillaging and stealing resources of other peoples. He doesn’t like our strong military that can project and protect peace around the world.

In addressing these children from South and Central America, Obama says they’re here to build America’s future. “That’s why they get in here. They are really, really special. They are the future of America.” Here’s a perspective no one is considering, especially the compliant media. H/T Rush Limbaugh . . .

So, is it right for us to steal the hope and future and future greatness of Mexico, Guatemala, and El Salvador by taking these young gifts of love away from those countries?  What gives us the right, I ask?  What gives us the right to take these young kids who determine the future? They’re so talented, they’re so good, they’re so important, that our future rests on them.  What about Mexico, Guatemala, El Salvador, where they are from?

The first president in our country’s history to speak this way is Barack Obama. That’s who.

And in typical fashion, this emotional appeal is not about anything humanitarian. The sleight of hand is, Obama isn’t talking about America’s future. He’s talking about the Democrat Party’s future.

Hear Rush explain it like no one else will.

Link: Obama: The Illegal Children are Our Future | What’s Behind The New Surge Of Illegals?