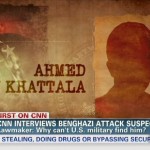 He was never questioned since the attack (by authorities). And he lived openly in Benghazi.

The terrorist involved in the Benghazi attack said in an interview to an AP reporter . . .

“I am in my city, having a normal life and have no troubles,” he told The Associated Press late last year after he was first accused. He denied the allegations and said he didn’t fear being abducted from Libya.

And this is the Commander-in-Chief’s statement on the “capture.”

The fact that he is now in U.S. custody is a testament to the painstaking efforts of our military, law enforcement, and intelligence personnel.

now face the full weight of the American justice system.

All of which means that this capture now, after two years of doing nothing, with President Obama’s approval ratings lower than ever, lower than Bush’s low, was nothing but politically motivated.

It also leaves open the question whether Attorney General Eric Holder will represent the United States or Khattala.

Bringing Club Gitmo detainees to trial in New York is just a continuance of Eric Holder’s defense (as opposed to prosecution) of these enemy combatants. Defending them is what he did at his New York law firm Covington & Burling.

Here’s the plea deal. He has to write “I will not kill infidels” 500 times on the blackboard, and he has to say that he was inspired by a video made by a guy who is still in prison, before he is released and returned to the battlefield in Afghanistan.