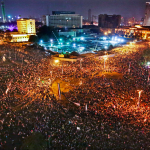 Since the so-called Arab Spring in Egypt, sexual assaults have increased exponentially, by groups of men, and in public places. Women’s groups called on Egypt’s President Abdel-Fattah el-Sissi to do something about the “mass sexual rape and mass sexual assaults.”

On Monday, 29 women’s rights groups released a joint statement accusing the government of failing do enough to address the spiraling outbreak of mob attacks on women. “Combatting that phenomena requires a comprehensive national strategy,” they said.

The writer of the Associated Press story, Hamza Hendawi, goes out of his way to excuse or omit the obvious with this line. “Sexual harassment has been one of Egypt’s enduring social ills, embedded in the country’s patriarchal conservative culture, where women are generally seen as inferior to men.” Islam is the “social ill.” The slimy side of Islam floated to the top with the overthrow of Mubarak. And only got worse when the Muslim Brotherhood’s President Mohamed Morsi (also not mentioned in the article) was ousted by El-Sissi.