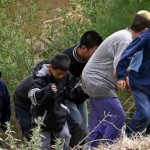 This phenomenon of illegal immigrants, including minor children with no accompanying adult, that are flooding the Texas border will come as a complete surprise to President Obama. That is, until he reads about it in the paper. That’s been the meme so far with everything wrong with his administration.

This surge is no accident. Especially so in the eve of mid-term elections. And now that Eric Cantor was swamped by a real conservative that, unlike Cantor, believes in legal immigration and secure borders, you can bet that President Obama will be on a full court press to swamp resources in Arizona and every other state with illegals.

Why has the flow gone from 6,500 to 90,000 in one year? Something happened. Like this, Central America Newspapers Tout Open US Door for Illegal Minors. This has Barack Obama, Valerie Jarrett and Andy Stern’s (SEIU) fingerprints all over it. If I had to guess that this is not an accident, I’d guess that these people are involved. It is the orchestrated crisis that Cloward and Piven wrote about. And a strategy that all three players take to heart.

And did you know that the lawless Obama administration, aside from not enforcing current immigration laws, is now committing child abuse en masse. If you or I dropped a minor child on a street corner or a bus station without an adult, you would be charged with child abuse. But when President Obama and ICE do it, no problem. Let’s dump these kids on Arizona Gov. Jan Brewer. “Serves the bitch right.” That’s where this administration is coming from. The country be damned. Oh well, of course. That is his goal you know. Tearing this country apart from everything it was founded on is part of what fundamental change (to him) looks like.

“Violating state law is something federal officials can still be held accountable for,” says Montgomery. “Kids are being dropped off in the middle of Phoenix, in June, with temperatures exceeding 100 degrees. I sent a letter to ICE, saying that if those circumstances are occurring, or did occur, would be a violation of Arizona laws against child abuse.”