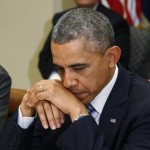 No longer will the Commander-in-Chief of the United States fight wars the old-fashioned way, to win them. He now says his new strategy is to let the local ill-equipped (in so many ways) villagers determine the future of our sons and daughters in harm’s way.

This so-called “new” strategy he has for our armed forces is to train the locals so they can carry the fight. If my memory serves me, we’ve been training the Afghan government to train their “soldiers” for the last ten years, and now he says we’re going to keep on doing the same thing? Only with way less of our troops to be around for protection. He calls it, wait for it, My Brother’s Keeper Task Force.

“We have to develop a strategy that matches this diffuse threat – one that expands our reach without sending forces that stretch our military too thin, or stir up local resentments,” Obama said. “We need partners to fight terrorists alongside us.”

If, after ten years, the Afghan government doesn’t know how to train its “military” to fight against terrorism, then the only responsible thing to do with our troops is to bring them home. Don’t leave them there to die at the hands of the dirtbag who is supposed to be on our side. He is charged with being the keeper of our brothers and sisters. But he won’t.

President Obama is delusional when it comes to fighting a war and Islamic terrorism. He isn’t in it to win it. He’s in it to end it. Only with the added idiocy of sacrificing our own men and women so he can look good politically, in his own troubled little mind.