According to former Congressman Joe Scarborough (R-FL1), those House members (R’s and D’s) who voted against the gun control 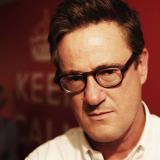 bill last week are “against background checks for criminals and terrorists” and “occupy the most extreme corner of American politics.”

I don’t know anyone who is against background checks for purchasing firearms, including the NRA. Background checks have been law for decades now. But that’s not the case from wherever Joe sits.

Only in the mind of the far Left is the 2nd Amendment in the “extreme corner of American politics.” Basically, it has nothing to do with politics. It is part of the Constitution that lawmakers are charged with protecting and defending. Second Amendment be dammed, Joe has made using 20 dead school children his cause for infringing upon the 2nd Amendment. Tugging on ones heartstrings is what Liberals do, and that’s what Joe is doing in this article. Creating his straw man argument for more gun control laws.

Could it be that Joe (Morning Joe) Scarborough isn’t aware that criminals and terrorists are already not permitted to buy or posses firearms?

Could it possibly be that Joe isn’t aware that the provisions in the bill that was defeated last week would have done nothing to stop the kind of violence that has brought “gun control” to the front page again, including the Sandy Hook Elementary school massacre and including the Boston terrorist bombers?

And could it be that Joe, like the President, wants an issue to use for political advantage (presumably for Democrats) than to insist on enforcing current laws before infringing on the rights of law-abiding citizens by calling for more laws that criminals and terrorists won’t obey anyway?

Jeri MacDonald on Joe’s facebook page said “Joe, i wish you’d come over to the left side!” Judging from his article in Politico, that is a redundant statement.