Philadelphia Mayor Michael Nutter, in an effort to legislate some brotherly love, signed a bill that bans firearms from public parks and 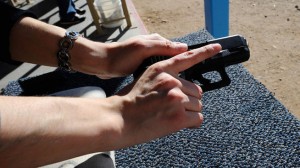 recreation areas. Placing restrictions, and limiting the ability of law-abiding citizens to protect themselves is his idea of public safety.

Denying reality, bill sponsor Councilwoman Cindy Bass (D) said “There’s no reason to have a firearm at a public playground.” Oh really? Here’s one! According to police records, there have been more than 50 shootings at rec centers and playgrounds in Philadelphia since 2010.

What is so difficult for these Democrats to understand that it is the criminal, not the politicians, who decide whether there is a reason to have a firearm, as well as the capacity of your magazines?

Councilman David Oh (R), one of two (out of seventeen) council members who voted against the bill argued that the ban hurts legal handgun owners since all the shootings at city parks have involved illegal guns.

Mayor Nutter and the City Council are forcing law-abiding citizens to make a choice when it comes to using these city facilities. To use them and put your family in danger. Use them but break the law by carrying your otherwise lawful weapon in order to provide protection as may be necessary. Or, not use them and turn them over to the criminals.