What? That’s right. NBC’s coverage of the Republican National Convention on Tuesday did not include Blacks, Mia Love and Artur Davis, or Hispanics, Ted Cruz.

They were not shown on broadcast NBC or cable MSNBC.

After being caught editing George Zimmerman’s 911 call, and now this, it is NBC that has racial issues. They have lost all credibility as a news organization. But they do function well as the spin doctors for the Obama White House.

In another example of liberal-think that is a mirror image of the “No Place In The Public Square” comment by liberal commentator Robert Beckel, Washington Post editorial columnist Charles Lane doesn’t believe military people should have a say in the public political arena either.

“I don’t believe military and intelligence people, even retireds, should have a major role in politics.”

The statement begins at 01:04 into the video.


In just the last two weeks, the Left doesn’t approve of, successful business people (Bob Beckel) or people in the military, active or retired, or people in the intelligence community (Chuck Lane), having a say in the public political discourse.

Both times, Beckel and Lane, were on a FOX News program. And both times the statements went unchallenged. Granted that those statements were not the topic of the discussion and would have changed the topic had they been challenged. So I can half understand why they were left to fly on by.

Seems to me that the Left’s desire to squelch speech and opinions that they don’t like, is a story in and of itself.

Russian President Vladimir Putin has his version of freedom. And it doesn’t include a female rock band singing songs protesting Putin’s Russia. The band, named Pussy Riot,  is Nadezhda Tolokonnikova, 22, Maria Alekhina, 24, and Yekaterina Samutsevich, 30, was arrested in March after performing a “punk prayer” in Christ the Savior Cathedral, dancing and high-kicking as they called on the Virgin Mary to save Russia from Putin, who was elected to a third term as Russia’s president two weeks later.

And today the women were sentenced to two years in prison for “hooliganism.”

Arizona Governor Jan Brewer (R) signed an executive order of her own. Protecting her sovereign (used to be anyway) state,  the order essentially pulls up the welcome mat for illegal aliens. AKA undocumented democrats.

Republican Governor Jan Brewer issued an executive order saying state law bars benefits or state-issued identification for those in the country illegally — including those who qualify for the deferred-enforcement program announced by President Barack Obama in June, which kicked off yesterday. She directed agencies to block access for an estimated 80,000 immigrants in Arizona who may qualify.

I came across this handy map that should be part of their ‘registration package.’ 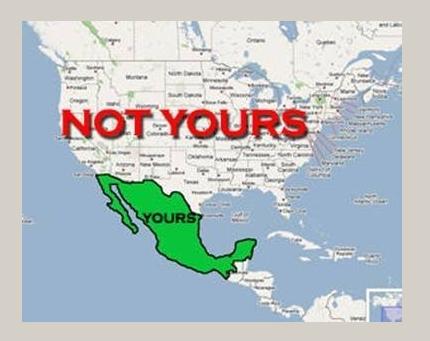 And that doesn’t include energy and its cost. Anyone would look at this and say, ‘Yeah, I’ll vote for more of that!’

Remember those “nice” and “decent” people Biden and Obama were talking about two days ago? Kissy kissy. Today Vice President Joe Biden told supporters that Republicans would “put y’all back in chains,” speaking before a “racially mixed” audience, during a campaign speech Tuesday in Danville, Va.  It’s obvious, there is no shame possible from this administration from the top down. And when ‘the top’ is the President of the United states, it’s disgraceful.

It’s even endorsed by The White House. Imagine that . . .

Folks, this is what a community organizer is. A president would not divide the American people against each other in every possible way he can think of, just so he can get re-elected. He got elected on “Hope and Change.” A post-racial society that HE was going to create in America. How’s that working out?

After two weeks of news media reporting on the ‘Romney Kills Wives’ ad produced by Priorities USA, a PAC run by Bill Burton, former White House deputy press secretary, essentially accusing Romney of being responsible for a woman’s death and not caring about it, there still have been no comments from President Obama or Vice President Biden about the ad. That is, until yesterday.

Both men spoke out about their opponents character. On the same day. This was their attempt to distanced themselves from the ad, without saying a word about it.

At any rate, their statements do two things. First they inoculate them from any and all future PAC ads, no matter how ridiculous, bordering on primal fear, they might be. Because they’re on the record as saying, hey, Romney and Ryan, they’re good guys.

The other thing it does is give the green light to the PACs that support them. Regardless of the content.

The good news is, Rep. Paul Ryan is the man to effectively, and factually, communicate the agenda while effectively answering all the hyperbole from the Lefty PACs and the Obama/Biden campaign.

Do you think the media would be so uninterested in expecting a word of condemnation from the President and Vice President if they were a ‘R’ instead of a ‘D’?

Never mind this exhibition of their lack of moral standard to publicly denounce the implied message in that ad. No matter where it came from.  The fact that they won’t, tells you where their heart is. For them, it is win at any cost and above all else. And that ‘Romney kills wives’ ad sets the new standard in political campaigns. It’s the Chicago way.

President Obama just illustrated the power of the bully pulpit. Knowingly or not, the content of what he said will have a negative effect on an already stagnant economy.

The business climate now is in survival mode. Not hiring employees and not planning to expand. The administration is doing everything it can to depress private business by Fear, Uncertainty, and Doubt. The FUD Factor. And it has been that way since before President Obama was inaugurated.

The power grab the Obama administration has perpetrated over various industries and companies within his first 100 days is sending only one message to business. Watch out, you could be next.

President Obama’s recent statement answers the final question. Who, what business, or what industry, could be next? Given the chance, he wants “every industry.” After finally admitting to how he truly intends to change this country, there is no end to the FUD Factor where private sector business is concerned.

Until the FUD Factor is eliminated, there will be

You know, the whole economic scheme that Obama said “works”.

Couldn’t have said more to perpetuate the fear, uncertainty, and doubt to American business. He’s already got his thumb on energy-related industries. Preventing (high-paying, union) oil industry jobs from being created, and kicking coal miners out of a job. Now, it’s everyone else.

This should come as no surprise to anyone that knows these two, the hemisphere’s idiot Hugo Chavez, and Sean Penn, our American version.

Penn is campaigning for the dictator responsible for oppressing Venezuelans and killing its economy through confiscation and nationalization of industries including energy, food, and the media. Now, Venezuelans can’t afford gas for their cars, the supermarket shelves are empty, and any opposition to Chavez comes from outside the state-operated radio and television.

I don’t know that Sean Penn campaigning for Chavez amounts to any kind of treason. It does, however, make him a soul brother to the hemisphere’s idiot.

There’s never been a more glaring example of the way Liberals think than the statement The Five’s Bob Beckel made on Friday’s show.

Here’s the context. They started discussing the way that Chick-fil-A was being persecuted in the media by Democrat politicians for something as bad as having an opinion. An opinion, btw, held in common with most of the country. But apparently not by most high-profile Democrats. Like Rahm Emanual and that religious bigot in Boston Thomas Menino.

I can’t accuse Rahm Emanual of being a religious bigot because at least he was honest about it where his city, Chicago, is concerned. He said that the Chick-fil-A president does not represent the values of Chicago. Judging by the murder rate among Eric Holder’s “people” there, he’s right.

Getting back to Beckel and Liberals. Beckel said “that guy, a high-profile rich business man like that, has no place in the public square.” Here is Liberal-think in one simple statement. First Amendment aside, he is 1) attacking business, 2) attacking success, and 3) telling us who they think should not voice a public opinion. They of course only “approve” their opinions. No, that’s not exactly it. They also want to be the only voice heard in so-called public discourse.

I just thank Bob Beckel for illustrating so clearly how the Left’s belief system is  incumbered by nothing. Including the Constitution.