GDP ‘growth’ fell from 2 to 1.5% for the second quarter ending June. Or to put it another way, a 25% decrease from the first quarter. That’s how it would be described if it was Bush in the White House. And arrgh! We’re headed for a depression! But what do we get? From the architect himself, it is “a step in the right direction.” And, I need another trillion in “stimulus” spending to keep the economy moving “forward. ”

This from the guy that pretends that “taxing the rich” is something fiscally responsible to do for the economy. Something ‘fair,’ given that we are now over $15 trillion dollars in debt.

Let’s talk about being ‘responsible.’ Truth is, Obama has incurred over a trillion dollars in new debt each year he has been in office. And his 10 year budget projection has no year where the annual deficit increases by less than a trillion dollars. In fact, Treasury Secretary Tim Geithner told House Budget Committee Chairman Paul Ryan that they have no plan to reach a balanced budget. Ever! Completely ignoring the debt bomb on year 11 caused by baby boomers entering Social Security and Medicare.

We’re not coming before you to say we have a definitive solution to our long-term problem. What we do know is we don’t like yours.

At current spending levels,”taxing the rich”, as Obama puts it, would generate enough revenue to run the government for a total of eight days. Does that sound like a solution to the debt problem? How is that being responsible?

Now if these economic and political facts do not illustrate that his “tax the rich” campaign serves no economic purpose, is nothing more than his divide-and-conquer strategy to stay in The White House via class warfare, I don’t know what can.

Parting Shot for the AP

Couldn’t help but notice the slug in the Chicago Tribune’s article compared to the title in the dead-tree version and online.

In fact, that AP article is so rich (none of it good for Obama) in the condition of the economy and the administrations’ performance that it requires a post of its own. The bad news in it for Obama is dispersed over the entire article to avoid a connection to Obama. Except this one line in a 971 word article “The lackluster economy is raising pressure on President Barack Obama in his re-election fight…” 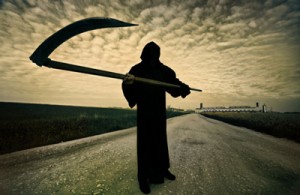 Link: The Religion of Peace

While the economy slows down, and unemployment is at record levels for a record amount of time, President Obama’s message is revealing more and more of his Marxist philosophy and fascist economic model tendencies when he says that small business owners did not make their business or make them grow. “If you’re successful in business, you didn’t get there on your own,” he said. That “someone else” he suggests is the government. A defeatist attitude for free-market capitalism and, for America as we know it. And particularly dangerous coming from our president.

None of this comes as a surprise when you understand who Barack Obama is. If the media had vetted Obama in 2008 like they did Romney in 2012, Romney would be running against Hillary Clinton today. Instead, the media still protects him. Safe to say, Barack Obama didn’t get where he is on his own. He writes about having been tutored, and mentored by the best communists and anarchists the 1960’s produced. His school records? Well, they’re sealed. From Obama’s life experience, he must believe that, like himself, you didn’t get there on your own either.

What’s this all about? A little pushback of the talking-head Left’s lack of “patriotism” and respect of the nation’s history. That’s all.

“No one has the Star Spangled Banner on their iPod.”
– Comedian Daniel Tosh

Now I do. Two versions in fact. I know Tosh is a comedian. But it is a venue where a lot of the dumb masses get their “news.” Not a very deep bunch.

And then there’s this classic Jimi Hendrix version at Woodstock.

A FairTax Rep and a US Tax Code Rep answer tax questions over lunch. “HOW CAN I PAY LESS TAXES?”

Today’s Weekly Address from The White House was about the massacre in Aurora, Colorado. And it is a good message.

But it sounds a lot like his ‘first reaction’ on Friday. Hit <replay> on the teleprompter. Even in this circumstance, he doesn’t speak to us ‘live.’

Not sure if I’m being too critical, or expecting too much, of him?

Here are seven informative FairTax videos that answer that question. Each one shows the benefits of the FairTax compared to the current IRS tax code. The last one features Secretary of the Treasury Timothy Geithner. END_OF_DOCUMENT_TOKEN_TO_BE_REPLACED

Isn’t it amazing how the politicos in Washington get their shorts in a wad over uniforms for the U.S. olympic team being made in China? Too bad they aren’t as concerned when it comes to borrowing their money.

While the economy slows down, and unemployment is at record levels for a record amount of time, President Obama’s message is revealing more and more of his Marxist philosophy and fascist economic model tendencies when he says  that small business owners did not make their business or make them grow. “If you’re successful in business, you didn’t get there on your own,” he said. That “someone else” he suggests is the government. A defeatist attitude for free-market capitalism and, for America as we know it. And particularly dangerous coming from our president.

As an aside from the debate in Washington about whether or not to raise the debt ceiling, spend less, or balance the budget, there is something else just as ominous to the country and future generations that you should know about.

We all understand that borrowing money has a direct cost to it, the interest rate. Interest rates now are at all-time lows. No problem. When interest rates go back up, big problem.

Sen. Tom Coburn expounds on the “Debt Bomb.” “The problem isn’t that we haven’t agreed, the problem is that we’ve agreed way too much,” explained Senator Tom Coburn (R-OK) in a recent interview with The Heritage Foundation. “Otherwise we wouldn’t have trillion-dollar deficits, $16 trillion in debt, and unfunded liabilities of $113-131 trillion.”

Amongst the class warfare tax rhetoric, repeating (known) debunked stories about Bain and Romney, was this most unreported story on Friday . . .Obama just gutted the welfare reform act of 1996 by eliminating the work requirement. No debate or involvement of congress.

This reform was very successful. TANF became the only welfare program (out of more than 70) that promoted greater self-reliance. It moved 2.8 million families off the welfare rolls and into jobs so that they were providing for themselves. Child poverty fell, and single-parent employment rose. Recipients were required to perform at least 20–30 hours per week of work or job preparation activities in exchange for the cash benefit.

Now, Obama’s HHS is claiming that it can waive those work requirements that are at the heart of the law, and without Congress’s consent.

Who knew there was a groundswell of opinion to define watching TV or sleeping as ‘work?’ Working hard to grow a population dependent on the government? Check. It also shows that Obama is not restrained by the law and, is no advocate for the poor. Taking steps to help dismantle a productive family is not helpful. It’s disgraceful. Screw the constitution.

A day at the beach on the fourth of July. Look at what government schools are turning out. “What’s a founding father?” Great editing job Jesse Watters.