In what would otherwise hands-down qualify for the M.R.I.O.T.D. award, what President Obama said today about congress continuing to fund what he deems as his government goes way beyond ridiculous into the absurd. 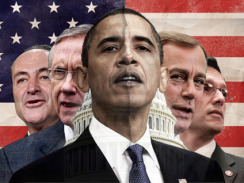 In a statement Wednesday, the president called for immediate budget negotiations between Congress and the White House, with Vice President Biden, Chief of Staff William Daley and Budget Director Jack Lew playing a role.

“I’m pleased that Democrats and Republicans in Congress came together and passed a plan that will cut spending and keep the government running for the next two weeks,” he said. “But we cannot keep doing business this way. Living with the threat of a shutdown every few weeks is not responsible, and it puts our economic progress in jeopardy.”

Mt. [sic] Obama said a long term agreement “should cut spending and reduce deficits without damaging economic growth or gutting investments in education, research and development that will create jobs and secure our future.”

“This agreement should be bipartisan, it should be free of any party’s social or political agenda, and it should be reached without delay,” he added.

President Obama must be suffering from an early onset of Alzheimer’s or that’s not tobacco in his cigarettes, because this entire issue of pressing for CR’s to avoid a government shutdown was caused by him. His lack of leadership in pressing his Democrat-controlled congress last summer to propose a 2011 budget is why we are where we are today. He is really the one to talk about not being responsible, and of putting ‘economic progress’ in jeopardy. Do you see any economic progress?

Calling for a meeting with Joe BFD Biden, William Chicago Daley, and new Budget Director Jack Lew about his budget mess is his way of making an empty suit look like there’s something in it. Calling meetings and committees to ostensibly solve problems is no substitute for leadership. You can be assured that the media will not notice.

All this, and then some, could have been avoided if congress and the president had done their job last year. But it is no accident that a 2011 budget was not submitted last year. Had he submitted a budget that included doubling the size of government like he has done and increasing the debt like he has done and is planning to do, the mid-term elections would have included a new majority party in the senate as well.

To be fair, there are a couple possibilities for why there was no 2011 budget. One is gross incompetence on the part of the president and the Democrat-controlled House of Representatives under Speaker Pelosi. The other is that it was a political calculation to not have one, which would have shown Obama’s cards for what he had in store in 2011. I’d go with the latter. Unrestrained by a budget, spending like there’s no tomorrow to prop up Big Labor and kill the economy by burdening future generations with debt becomes much easier.

Neither possibility is good. Not for them or America. You might expect it of a community organizer, but not the President of the United States. Which one works for you?