January of 2009. Hope was in the air, but more importantly, gas was under two dollars a gallon. Since then gas prices, have gone up 67 percent and it’s an ominously upward trend. Interestingly enough, the Heritage Foundation also took a look at the first 26 months of Bush’s presidency — gas only rose 7 percent during that time frame. 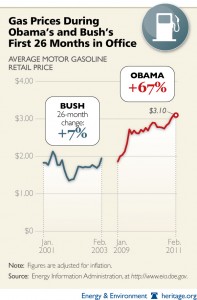 Of course, there’s more to the story. Available HERE. As for who is driving this car? His name is Hope.