The purpose of the census, done once every ten years, is to make adjustments in the House of Representatives to assure accurate representation in Washington based on population of the states. This interactive map provided by the Census Bureau illustrates the population shift for the last hundred years.

“This 2010 census population represents a growth of 9.7 per cent over the official population count of 2000.”

“As you know the constitutional purpose of the census is the redistribution of the membership of the House of Representatives across states proportional to the population,” continued Groves. “Since 1940 the law has specified that the Census Bureau use the method of equal proportions to assign seats to the states.”

Pointing out the trend since 1940 that N.E. and Midwestern states lose seats, and South and Western states gain seats (creating a net shift of 79 seats) Groves went on to prove this decade as no exception. This decade’s population spread will see a 12-seat shift with eight states gaining representatives, 10 states losing seats. Texas benefits most with a gain of four seats. 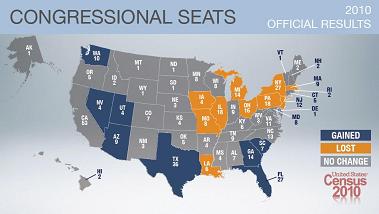