Who would have thought that we would have seen this much change in under 100 days?

March 20, 2009, administration and congress pass a law taking the wages of certain private citizens via a 90% tax. This was the confiscation of bonuses paid to AIG executives that were expressly approved by (Chris Dodd) this administration in the stimulus bill. This was also the day the U.S. Constitution died.

April 2, 2009, the repeal of the Declaration of Independence by subjugating our sovereignty to a Financial Stability Board (FSB) invented by the G20 states.

April 17, 2009, Obama administration declassifies memos detailing harsh interrogation techniques and the justification for it. Laying bare the program to our enemies. And at the same time does not release the memos showing that those techniques were successful in saving lives and preventing attacks. And at the same time announces that those techniques will be discontinued. Going forward, either Dr. Phil or Oprah will be interrogating the terrorists1. 1(terrorist: the ‘man’ part of a man-made disaster)

April 19, 2009, after pouring hundreds of billions of dollars into the banking system, replacing CEO’s, confiscating salaries, trying to set maximum salaries for financial industry workers, the Obama administration is now considering converting the bailout loans into common shares, giving the government a large ownership stake. All the while refusing to let banks repay the bailout money they received.

After the longest campaign in history, and after distancing himself from his radical friends like William Ayers and Jeremiah Wright. It’s not hard to imagine the three of them giving a fist-bump to each other and Obama saying ‘How do you like me now America?’

Now that the election is over, what we are seeing is the fastest slide from freedom and free-market capitalism in history. Through legislation, this administration has trashed the very documents it is sworn to protect and defend. In less than 100 days, President Obama (the Constitutional lawyer) has managed to re-write the Constitution without laying a pen on it. 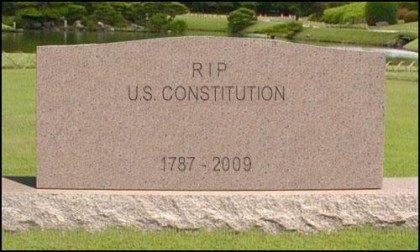