While three days of mourning, praying and fasting for the victims for the Egyptian Coptic Christians begins tomorrow, look back eight months ago and see that I wasn’t the only one who thought Obama was a participant in the Egyptian uprising.

Obama sowed the seeds, stoked the fire, then disappeared; allowing the Muslim Brotherhood to take over. It’s like community organizing at the country level.

He has replaced one dictator with another. Only this one is much more violent. This ‘dictator’ burns down Christian churches. Bibles and all. Now they are targeting and killing Christians with much less abandon.

Does this get him a feather for his diplomatic hat?

Link: Credit Obama, Not the Bush Administration, for Seeds of the Egyptian Revolution

It will be revealing to see how, or whether, President Obama deals with the church bombings, rioting, and the killing of 26 Coptic Christians in Egypt over the weekend.

Egypt’s Coptic church blasted authorities Monday for allowing repeated attacks on Christians with impunity as the death toll from a night of rioting rose to 26, most of them Christians who were trying to stage a peaceful protest in Cairo over an attack on a church.

The spiritual leader of the Coptic Christian minority, Pope Shenouda III, declared three days of mourning, praying and fasting for the victims starting on Tuesday and also presided over funerals for some of the Christians killed. Sunday’s sectarian violence was the worst in Egypt since the uprising that ousted Hosni Mubarak in February.

For the role he claims to have played in the Arab Spring, President Barack Hussein Obama (Mmm, Mmm, mmmm), the one who was going to unify the world,  now has Christians’ blood on his hands.

Guess whats been happening in Iraq and Iran? Haven’t you heard?

Secretary of Defense Leon Panetta says Iran is increasingly being involved in supporting attacks on the U.S. military in Iraq.

During a surprise visit to Baghdad on July 11, Panetta blamed Iran for the spike in Shi’ite militia attacks on the U.S. military. Panetta said the U.S. military would act without Iraq Army approval to stop what he termed the Iranian campaign against American troops, Middle East Newsline reported.

In June, 14 American soldiers were killed in the deadliest month for the U.S. military since 2008 amid what officials said marked intensified Iranian training of Shi’ite proxies.

And Iraq is facing the prospect of secession by its minority Sunni community. The Iraq government “has lost control over much of the Sunni community,” particularly in the western province of Anbar.

Looks like the ‘debt ceiling’ and ‘default’ hysteria has succeeded in keeping the new trouble in the Middle East from being reported. And there is no one in the Obama administration, including the Commander-in-Chief himself, talking about it. 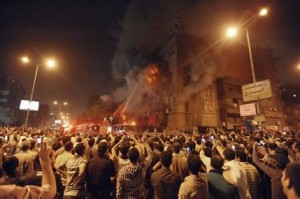 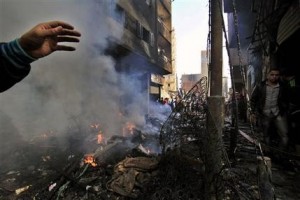 News reports are not including the names or nationalities of the three men that caused the Washington D.C. to Portland, OR flight to land in Chicago. But passengers on the flight described them as ‘Middle Eastern.’

What are the chances they were from Israel?  That’s in the Middle East. They were probably just playing a game called ‘test the system.’ Want to play ‘guess their religion?’

More on this story at Debbie Schlussel.

I’ll go out on a limb and suggest that the second-class status of women extends beyond Egypt, to wherever fundamentalist Muslim people live. The United States being the possible exception.

Women in Egypt, celebrating International Women’s Day, were met with angry mobs of men telling them to go back home where they belong.

The N.O.W. gang has a new task ahead of them. Should they choose to accept it.

For days now we’ve head the story about Somali outlaws that pirated a boat with 4 Americans on board. The Americans were trying to live out their retirement sailing off of the East coast of Africa, and passing out bibles along the way as missionaries. As an aside, merely having bibles can get you killed in Islamic extremist circles.

While being shadowed and finally approached by the U.S. Navy, the Somalis shot and killed all of their hostages several hundred miles south of Oman.

Here’s where the plot thickens. According to The White House . . .

President Barack Obama was awakened to news of the deaths at 4:42 a.m. Washington time Tuesday. He had authorized the military on Saturday to use force in case of an imminent threat to the hostages, said White House spokesman Jay Carney.

And the headlines are US condemns pirate killings, Navy holding suspects. And Secretary of State Hillary Clinton said in a statement that the killings were “deplorable” and that they underscored the need for international cooperation on fighting the scourge of piracy in waters off the Horn of Africa. Like that’s going to have any consequence.

The remains of the four were taken aboard the USS Enterprise, as were 15 suspected pirates now facing charges in the deaths.

What’s wrong with this picture? If the Navy was authorized by the Commander In Chief to use force, why would there be 15 ‘suspects’ in custody? After all the history of these pirates, using our military to be constables is an abuse of the military. Forget the ‘suspected pirates’ angle, they are confirmed murderers on the high seas.

Just another case where President Obama cares less about protecting and defending Americans than the Islamic goons who murdered them. The Navy should let those prisoners go immediately. And I don’t mean in a boat. Take no prisoners. For their crimes, letting them go 600 miles out at sea is the best place for them.

Only president I know that toppled a dictator recently was George Bush taking down Saddam Hussein. At that time, the same protesters that took to the streets in Egypt these last two weeks were the same ones that protested the taking down of Saddam Hussein in favor of a democracy. And they were joined by most Democrats and the media.

Today, however, it’s a totally different picture. Today some of the media, like a University of West Florida professor (I’m still trying to find out her name)  that was interviewed by the Florida News Network as an ‘expert’ on Egypt and the Middle East, are trying to attach the overthrow of Mubarak to President Obama. Giving him ‘credit’ for Mubarak’s ouster. As if Obama had anything to do with it. She said it regains America’s trust in President Obama. Well isn’t this rich? Obviously, Obama has lost whatever trust and respect he may have had, as evidenced by this so-called expert, and as confirmed by Oprah yesterday. And for any number of reasons, not the least of which was his and his advisors’ handling of the uprising in Egypt.

And while we’re on the topic of toppling dictators, lets see what side Obama supports this time in Iran. Young people (same as in Egypt) there want to demonstrate in Iran again, this time to support the democracy push in Egypt, but the Mullahs and Ahmadinejad are warning them not do take to the streets. Will President Obama come down on the side of the youths wanting democracy, or on the dictator’s side like he did in 2009?

“I have made it clear that the United States respects the sovereignty of the Islamic Republic of Iran, and is not interfering in Iran’s affairs,” Mr Obama said.

Link: Demonstrations not encouraged in Iran

Since yesterday’s embarrassment, apparently numb to his impish behavior on the world stage, President Obama felt it necessary to amp it up even more. Too bad he doesn’t treat America’s enemies with the same audacity as our allies.

On this audition for Saturday Night Live, here is AP’s account of what President Obama said . . .

Without naming Mubarak directly, Obama issued a written statement on Thursday night in which he criticized the leader for a lack of clarity and direction. That assessment came after Mubarak surprised those protesting in Egypt’s streets by saying, in a broadly watched speech, that he would shift powers to his vice president but remain in charge of the country. {emphasis added}

Too many Egyptians remain unconvinced that the government is serious about a genuine transition to democracy, and it is the responsibility of the government to speak clearly to the Egyptian people and the world.

If our president is going to criticize Egypt’s president for not putting out a clear message, and for not listening to his citizens, lets at least recognize that in that respect they are twins with one difference. One of them knows what he’s doing.