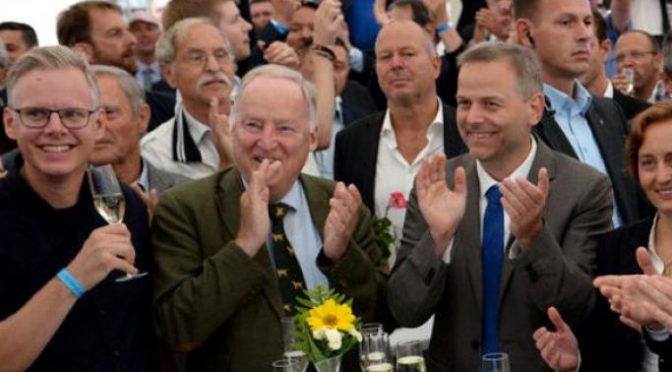 German Chancellor Angela Merkel’s “Christian Democrats Party” was handed a “sobering defeat.” Beaten into third place, in what was the first of five regional votes before a national election expected next September.  Turning in an all-time low result was a “stinging defeat” for Merkel in her home district.

She was beaten by a relatively new political party, the Alternative for Germany (AfD), that campaigned against her open border policies. Policies that have hurt, if not transformed, German life in the same way it has affected the EU in general.

Not surprisingly, the media characterizes the AfD, not as pro-Germany, nationalist, or populist. Not as anti-Merkel. But as anti-immigrant and anti-Islam. Same media. Different continent.

AfD party chair, Frauke Petry, described Sunday’s result as a blow to Angela Merkel. “Now it is our responsibility to make politics for the people. The people no longer trust the old establishment parties to do so,” Petry said.

Whether this election or the AfD signals a shift in German politics remains to be seen. But it does have the same organic feel like the Tea Party in the U.S. or Brexit in the U.K.