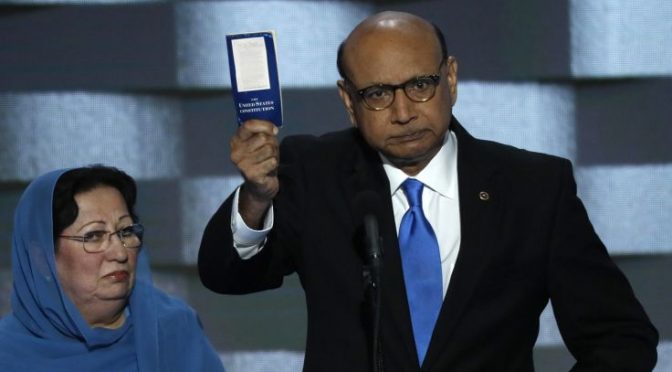 The 15 minutes of fame for Khizr Khan has passed. The mainstream media, and their political party are not done milking it as the big distraction though. Whatever! They, and the Clinton campaign, will do anything to draw the attention away from their flawed, lying, unqualified, and dangerous candidate and onto Donald Trump.

To mark the end of the Khizr Khan’s DNC speech (aka Trump Attack), it is necessary to finally address it.

“If it was up to Donald Trump, he never would have been in America.”

Gold Star father’s demagogic lie. The Khans immigrated here, decades ago, and legally. They were not scooped up and brought here like bales of hay. Trump only wants inhabitants of terrorist hotbed countries to stay in place, in safe zones within their own countries or nearby, so they can return home when the war is over, or until such time as a safe, and real, vetting process is in place.

Gold Star father’s demagogic lie. Trump calls out Islamic terrorists for what they are, terrorists. Only if Khizr Khan believes that all Muslims are terrorists could his attack on Trump be true. And Trump does not believe that. Maybe Khan does?

“He disrespects other minorities — women, judges, even his own party leadership.”

More political and demagogic rhetoric. Par for the course. Mr. Khan forgets the he isn’t the only American who has a 1st Amendment right. The “judge” of Mexican heritage Trump spoke of has his own biases on illegal immigration built-in, both in practice and otherwise.

“He vows to build walls and ban us from this country.”

Again, another attack based on a false narrative, on national television, at the political event. Typical “red meat” kind of rhetoric one would expect from a political hack like Debbie Was-a-man Shultz or Khizr Khan. Let’s be clear about the Syrian refugees. They are not coming here in boats, airplanes, or swimming across the ocean to get to America. If you ask them, they will tell you that they want to stay there and to go back home as soon as they can. But no,  they are being picked up like low-hanging fruit (and undocumented democrats) and brought here, by the thousands. Terrorists among them.

“Donald Trump, you are asking Americans to trust you with our future. Let me ask you: Have you even read the U.S. Constitution? I will gladly lend you my copy. In this document, look for the words “liberty” and “equal protection of law.””

Can’t speak for his copy of the Constitution, but my copy also says, above all else and, in the first sentence, called the Preamble, exactly what Donald Trump (and most Americans) wants to do. Look for the words “insure domestic Tranquility” and “provide for the common defense.” There is no liberty or equal protection for terrorists. Foreign or domestic. Similarly, the U.S. Constitution does not apply to inhabitants of Syria, Yemen, Tunisia, Somalia, Libya, Algeria, Nigeria, Sudan, or anywhere else and anyone else who is not a U.S. citizen.

“Have you ever been to Arlington Cemetery? Go look at the graves of the brave patriots who died defending America — you will see all faiths, genders, and ethnicities.”

More of the same demagogic rhetoric that fails to distinguish between regular Americans and those who want us dead. It’s what elected Democrats and Hillary Clinton do.

By his statements at the Democratic National Convention, what Khizr Khan is doing, and continues to do, aside from baseless attacks on Donald Trump, is to advocate on the side of the terrorists that killed his son. And that remains his cross (no pun intended) to bear.

One thought on “Khizr Khan, Rebuttal”