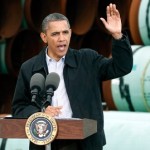 TransCanada has waited more than six years for the Obama administration to make a decision on the line, which would take as much as 830,000 barrels per

The delay has pushed up the cost of the line, which would run from Hardisty, Alberta, to near Houston. The company said last month that Keystone XL’s original $5.4 billion estimate is likely half of what it will now cost to build the pipeline.

Trying to make the delay look like an abundance of caution is causing Canada to look for a route to a port of their own. Secretary Kerry’s visit there is nothing more than the optics of giving the impression that the U.S. might actually want the XL pipeline. The real, and only, reason the administration is dragging its feet is because of the environmental lobby. You know, the lobbyists that then Senator Obama said would not be a part of his administration or decision-making. Because they are the only ones that are against it, it is clear that the administration values their campaign money more than the nation’s economy, security, and energy independence.

The delay is really a twofer for the president. Increasing cost on the energy sector is (in his mind) a good thing. Anything that increases the cost of fossil fuel energy is a good thing where Obama’s ideology lives. That the cost increase is not falling on taxpayers’ shoulders, but on the private sector, is the other “good” thing.