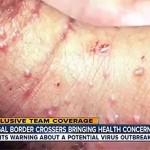 There are no arrest powers in the HIPPA legislation. This is what happens when you have a president who believes that the Constitution and the three equal branches of government are an impediment to his mission. He’ll have open borders, welcome undocumented democrats, even if it means spreading disease all over the country.

A government-contracted security force threatened to arrest doctors and nurses if they divulged any information about the contagion threat at a refugee camp housing illegal alien children at Lackland Air Force Base in San Antonio, Texas, sources say.

“There were several of us who wanted to talk about the camps, but the agents made it clear we would be arrested,” a psychiatric counselor told me. “We were under orders not to say anything.”

The sources said workers were guarded by a security force from the Baptist Family & Children’s Services, which the Department of Health and Human Services hired to run the Lackland Camp.

What is pathetic about this administration is that the Congress has abdicated its authority to put the brakes on him. Obama makes no bones about it, he says he’ll do what he wants without congress. His arrogant and condescending attitude is, “sue me, I’ll do what I want.”

Our founding fathers have to be rolling over in their graves. Not only for the tyrannical president, the a congress that is letting this happen, and the “free press” that is deaf, dumb, and blind to all the lawlessness.