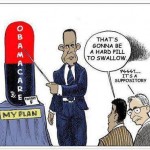 Have you begun to notice that the Affordable Care Act, which was supposed to be the greatest thing since sliced bread, (never mind that 85% of the population were happy with the health insurance and health care they had), keeps getting delayed (illegally I might add) from implementation? Curiously, all the bad stuff, like policy cancellations and the people seeing their premiums double and deductibles quadruple, losing their doctors, hospital, and medicine, keep being pushed back to periods AFTER elections. After 2012, after 2014, and now some provisions after 2016 and long after 2016.

If this law is so good, something that Americans just couldn’t live without, then let those policy cancellation notices come out in September and October of 2014. Let’s get it on already. It wouldn’t have anything to do with the fact that Democrats totally OWN the Affordable Care Act, aka Obamacare, would it? Or from the fact of what we’ve seen so far that it is turning out to be nothing like what was promised? Or maybe it was because the promises have been revealed to everybody, including democrats, to be not promises, but outright lies?

Ignoring the failure of Obamacare is one thing. What’s even more amazing is the democratic strategy for the 2014 mid-term election. A strategy designed to not make Democrats look like they have to run away from Obamacare. Their idea is to run on fixing it.

To a Democrat in Washington this makes perfect sense. Just like their inability to stimulate the economy with so-called stimulus spending, and wanting to spend more, while the only result is record long-term unemployment, the lowest worker participation rate since Jimmy Carter, and massive record national debt. In other words, they’ve proven that what they’re doing does not work. So let the ones who broke the economy fix the economy by doing the same thing that broke it in the first place.

It follows then that we should re-elect the people who destroyed our health care system and health insurance industry so that they can ostensibly “fix” it in however many years it will take. And that makes sense to who? Especially when there has been a private sector alternative solution to Obamacare for 4 years now. And on that topic, remember, every time you hear a Democrat say “they have no alternative,” you know they are lying to you again.