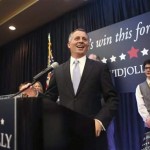 One Associated Press piece in the local paper titled Fla. House race could be warning for Democrats was all there was in the news media about the republican win in a district that voted for Obama in 2008 and 2012. In a contest that was described as a bellwether for the midterm elections in November, where Obamacare was the focus on both sides.

Tomorrow’s race in Florida will tell us a lot about the power of the Republican Party’s health-care attacks on Democrats could have in 2014.

Jolly campaigned on a conservative platform; cutting government spending, balanced budgets and repealing Obamacare. Sink tried a new version of offense with Obamacare; mend it, don’t end it. She followed the President’s agenda with a pro-illegal alien agenda, and more government spending. ‘Cutting spending’ and ‘balanced budget’ as an objective never crossed her lips.

Republican David Jolly beat Democrat Alex Sink with 48.5 percent of the vote to Sink’s 46.7 percent. Before the returns were in, Democrats began downplaying the importance of this contest. When the results were final, DNC Chair Debbie Was-a-man Shultz tried explaining away their loss, saying “the GOP fell short of its traditional margin” in a Republican-leaning district (but trending Democrat) packed with older voters.

She’s right about that. And the mainstream media carried her message. Missing in that fact is a little perspective. What she and the news media won’t say is that in all seven of Rep. Young’s elections, he ran unopposed. In this election, Jolly had two challengers. Sink a Democrat, and Libertarian candidate Lucas Overby.

Speaking of traditional margins. Third parties traditionally have given Democrats the win by siphoning off Republican party votes. Ralph Nader and Ross Perot come to mind. But this time, the nearly 5% that Overby got wasn’t enough to hand Sink a win. Also not mentioned was the fact that Jolly’s candidacy was not taken seriously by the establishment Republicans, allowing Jolly to be outspend by Democrats 3 to 1.

On the day before the election, Todd also said this . . .

Conversely, a Jolly win on Tuesday would signal that it’s open hunting season on Democrats — even in places where Obama has been a strength for Democrats in past elections.

It’s also open season on the establishment Republicans if they don’t stand on the principles that got them elected, and if they refuse to understand that running on conservative principles, compared with the status quo of the last 6 years, is how you win elections.